Los Angeles: Ben Simmons wasn't ready to go on vacation. The Australian 22-year-old swept away days of personal attacks to be at his dominant best and keep the Philadelphia 76ers alive in the NBA playoffs with a 112-101 victory over the Toronto Raptors.

The lopsided win in front of a parochial Philadelphia crowd tied the Eastern Conference semi-final series 3-3 and set up a game seven decider in Toronto on Sunday (Monday 9am AEST).

The winner will take on the top-seeded Milwaukee Bucks in the Eastern Conference finals. 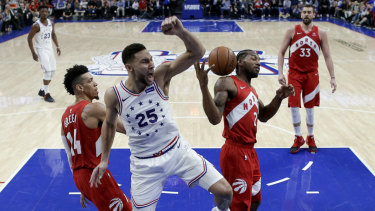 "What he did today was why he was an NBA All-Star at age 22," 76ers coach Brett Brown, offering a rave review of Simmons, told reporters.

Simmons was savaged by Philadelphia fans, US media and former NBA stars including Charles Barkley after he was listless in the Raptors' 36-point thrashing of the 76ers in game five.

The Australian said he was sick of the talk – but not the abuse from outside sources.

Simmons said it was time he stopped talking about playing with energy and went out and did it.

"It was just making a point of actually just doing it and not talking about it," Simmons told reporters.

Simmons set the tone for the 76ers with eight points and five assists in the first-quarter.

Brown noted Simmons' turnover free game, his "attack mode" on offence and four of his rebounds being on the offensive end.

The 76ers' other All-Stars, Joel Embiid and Jimmy Butler, were also impressive in the game six victory.

Embiid fought through illness to dominate the paint with 17 points, 12 rebounds and two blocks and Butler was inspirational with 25 points, six rebounds and eight assists.

Toronto's All-Star Kawhi Leonard had 29 points, 12 rebounds and five assists but it was not enough to counter the 76ers.

Simmons was spotted chatting to 76ers' great Julius "Dr J" Erving before the game, but the Australian declined to say if he was inspired by the legend's words.

"I can't tell you what he said," Simmons said.

There had been calls for the 76ers to trade Simmons after his recent subpar performances and his refusal to take shots outside the key.

Brown reminded the critics Simmons was 22-years-old and in just his second year in the NBA.

"Shame on us for thinking every day, all day, here he is and he's going to go and knock it out of the park," Brown said. "It's just not fair."

The Port Trail Blazers defeated the Denver Nuggets 119-108 to tie their playoff series at 3-3.