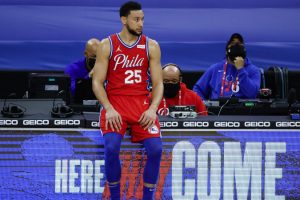 Australian Olympic squad members Ben Simmons, Joe Ingles and Matisse Thybulle showed why there are concerns they could miss the Tokyo Games after their NBA sides faced off on Thursday AEDT.

Simmons and Thybulle played key roles as their Philadelphia 76ers beat the Utah Jazz and Ingles 131-123 in overtime in Philadelphia. 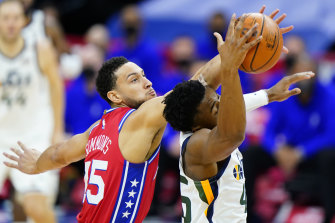 Ben Simmons put in a strong performance against and the Utah Jazz’s Donovan Mitchell in the Philadelphia 76ers’ win.Credit:AP

The Sixers (24-12 win-loss) and Jazz (27-9) will go into this weekend’s NBA All-Star break with the best records in the east and west conferences respectively, so they are poised for deep runs into the NBA play-offs.

Sixers coach Doc Rivers said he liked the trajectory of his team despite the emergence of the superstar Brooklyn Nets, who are just one loss behind in second place.

“I don’t look at it like that because we don’t get anything at half-time of the season,” Rivers said.

“We are playing good basketball but there is a great team in us. That is what we are striving to be.

“We’ve done that at least six times this season, where we were down but down the stretch we made comebacks and closed it out. It shows a mental toughness that some people didn’t think we had at the start of this season.”

If athletes are required to quarantine before the Games it will further make it difficult for those players to make it to Tokyo.

Simmons and Thybulle would be playing in their first Olympics, while Ingles would notch up his fourth – all three could be prospective starters depending on how Australian coach Brian Goorjian works out his line-ups.

Sixers centre Joel Embiid showed why he is an MVP candidate with 40 points and 19 rebounds against the Jazz.

Simmons further added to his claims to be the NBA defensive player of the year as he hassled Jazz star Donovan Mitchell, who scored 33 points but shot far worse than usual.

Rivers, who campaigned for US President Joe Biden in November, said he was now campaigning for Simmons.

“This is maybe my last campaign speech, other than for president, but Ben guards the best player every night,” Rivers said.

“He does this every night to everyone. Ben has been amazing and he needs more credit.”

Mitchell and Jazz teammate Ruby Gobert, a two-time defensive player of the year, hit out at the referees after some controversial calls assisted the Sixers to force overtime, with Mitchell uncharacteristically ejected late in overtime.

“Our guys are not able to get calls everybody else in the f—ing league gets,” Gobert said.

“We know we are the Utah Jazz, and maybe some people don’t want to see us go as far as we can go, but it’s disappointing.

“I think it’s disrespectful to the game of basketball and to our team, and hopefully they’re going to watch the game when they get home. Hopefully, they [referees] feel ashamed when they watch the game.”