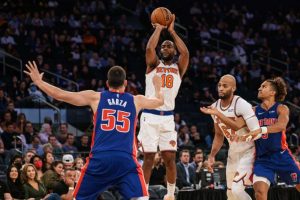 NEW YORK (REUTERS) – The New York Knicks are the National Basketball Association’s most valuable team for a seventh consecutive year, according to the annual list published by Forbes on Monday (Oct 18).

The Golden State Warriors (US$5.6 billion), Los Angeles Lakers (US$5.5 billion), Chicago Bulls (US$3.6 billion) and Boston Celtics (US$3.5 billion) rounded out the top five.

It marked the first time since Forbes began tracking the finances of NBA teams in 1998 that three franchises were worth US$5 billion each.

Despite the Covid-19 pandemic that kept fans from attending games for most of the 2020-21 NBA season, the average team value rose 13 per cent to US$2.48 billion due to record sponsorship revenue and high expectations for the league’s next media rights deal.

The reigning NBA champions Milwaukee Bucks were 17th on the list with a value of US$1.9 billion, up 17 per cent from last year.