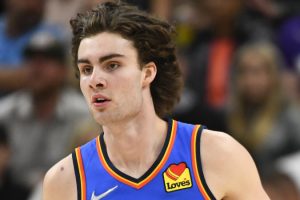 Giddey, who was selected No.6 overall in last year’s NBA Draft by the Oklahoma City Thunder, finished with 17 points, 14 assists and 13 rebounds in a 95-86 loss to the Dallas Mavericks on Monday (AEDT). 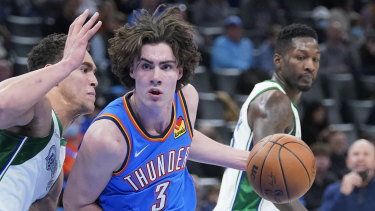 History maker: Josh Giddey on his way to become the youngest in NBA history to have a triple double.Credit:AP

Giddey, at 19 years and 84 days old, took the record from LaMelo Ball, who broke it last year during his rookie season for the Charlotte Hornets.

The Hornets point guard won NBL rookie honours during his lone season for the Illawarra Hawks in the 2019-2020 Australian season.

The duo both benefitted from significant game time in a professional league where they honed their craft against experienced players with bigger bodies.

The traditional path to the NBA Draft has been through the American college system, though in recent years more breakout stars have emerged from domestic leagues abroad, such as Australia’s NBL and Spain’s Liga ACB, where Mavericks All-Star Luka Doncic cut his teeth.

Giddey has emerged quickly as a highly capable prospect for the Thunder, despite many analysts and indeed Oklahoma City fans declaring his selection at No.6 a reach on the night of the Draft.

Standing 2.03m, Giddey has made the most of his opportunities for the rebuilding Thunder squad, quickly forging a formidable back-court combination with All-Star guard Shai Gilgeous-Alexander.