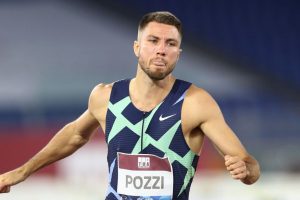 Andrew Pozzi, Britain’s world indoor hurdles champion, has made a living out of overcoming obstacles.

He has another 15 to get over in Poland this weekend if he is to come through three races and be in position to reclaim the European Indoor title over 60 metres.

But an even bigger barrier, created by Brexit, stands between him and his Olympic dream in Tokyo this summer.

Pozzi, boyfriend of Britain’s heptathlon queen Katarina Johnson-Thompson, lives and trains in Italy where he has spent the past two years.

Before Brexit UK citizens were free to do so without any special permits or visas. But as of January 1 there is a limit of 90 days out of every 180.

“Obviously for an athlete that is not sustainable and not the way to prepare,” said Pozzi, mindful that those who overstay that period may face penalties, including deportation and entry bans.

“Getting information about the best way to continue in Italy has been very difficult. It looks like I will have to take full-time residency in order to continue training there fully.”

Pozzi, 28, has already given up a lot in pursuit of track glory, living apart from family and Johnson-Thompson, who is based in the French city of Montpellier.

“Whether it’s worth it is a tough one to answer objectively because ultimately the sacrifices are perceivably worse than what it is I am trying to achieve here," he said.

“It is a very lonely experience as you spend a lot of time by yourself, but it helps that Kat is in a similar position. We are both trying to achieve the same thing and that understanding goes an awfully long way.

“This is a once-in-a-lifetime aim, it is very time-sensitive and these are the years I have to achieve it.”

Pozzi is ranked second in Europe but believes he is in shape to run faster than he has done before.