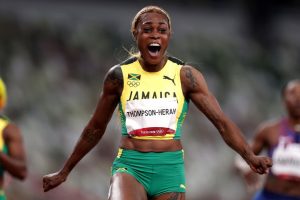 Elaine Thompson-Herah set a new Olympic record as Jamaica completed a stunning 1-2-3 in the 100m at Tokyo 2020.

Thompson-Herah defended her Rio 2016 gold medal with a time of 10.61, making her the second-fastest woman in history behind USA icon Florence Griffith-Joyner, who ran a world-record 10.49 in 1988.

The 29-year-old finished ahead of compatriots Shelly-Ann Fraser-Pryce, who won gold at Beijing 2008 and London 2012, in second and Shericka Jackson in third.

Team GB's Daryll Neita finished eighth having qualified as one of the fastest semi-final losers, while Dina Asher-Smith failed to make the final and subsequently withdrew from Tokyo 2020 due to injury.

Thompson-Herah sent an emphatic message to her critics as she basked in her gold-medal triumph, explaining how ongoing Achilles issues have made her stronger.

"I have been struggling with my injury back and forth," she told BBC Sport . "I see all the bad comments, and for me to stay focused, held my composure, I take all of my losses, all of my defeats and I use them as my motivation."

Olympics and sprinting legend Usian Bolt paid tribute to his fellow Jamaicans by posting "clean sweep" on social media with a picture of the three medalists.

But Fraser-Pryce could not hide her disappointment after finishing as runner-up in what was her final Olympic Games.

The 34-year-old – who will retire after next year's World Championships – said: "It wasn't the best 30m because I had a stumble at about the third step and I never recovered from it. Nevertheless I am grateful to be able to come out here and represent what God has given me.

"I am excited because as a mother and my fourth Olympics to be able to stand again on the podium is just a tremendous honour.

Can Elaine Thompson-Herah make it three consecutive gold medals at Paris 2024? Comment below.

"I am hoping wherever in the world, mothers, athletes, females we understand that there is so much more we can achieve.

"It is crazy, but you know my emotions are still very raw right now. I am sure I will go home and there will be some tears. I have been through this many, many times, so I am just really excited about what I have been able to do tonight."

Meanwhile, Neita said she felt "at home" in the final and said there are "no limits" to where her ability can take her.

"It's great to make the final. I came here with that ambition. This performance does not represent where I'm at," said the 24-year-old.

"I've ticked a lot of boxes this year, but it's the Olympics. I made the final – anything could happen. It's not the race I wanted but it's an achievement.

"I'm meant to be here, I feel like I belong – I'm at home. The mentality has grown and there's no limits."