Former Australian coach Justin Langer has attempted to smooth over the damage from his explosive interview earlier this week, saying he didn’t call Test captain Pat Cummins a coward, and that he was not at war with his former players.

In a News Corp podcast, Langer hit out at people who gave anonymous quotes against him to journalists saying the word “sourced” should be replaced with the word “coward”. 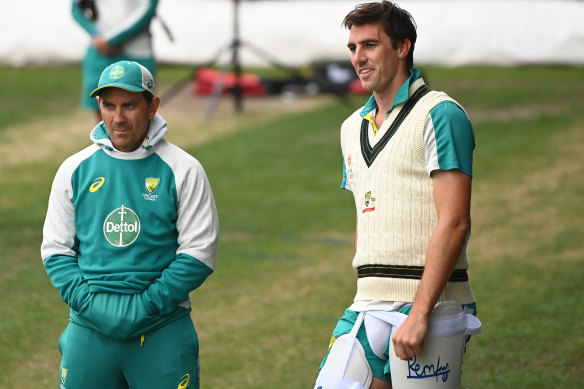 It reignited debate around his final days as national team coach when reports surfaced about issues between several senior players and the coach.

But in an interview with Seven on Thursday night, Langer said he held no grudges and was still in contact with his former players, including Cummins who had challenged Langer on how he coached the side.

Langer laughed at a question about whether he was at war with Cummins, and he looked forward to seeing him and the other players when he begins a role as a Seven commentator this summer, beginning with the first Test against the West Indies in Perth next week.

“I’ve been blown away by the last few days,” Langer told Seven.

“Ironically, I spoke to Patty on Monday. We had a long talk about how the team was going and how he’s going, how his family was going. And then about this summer.

“This is complete and utter rubbish. I’ve got so much respect for Patty Cummins, I think he’s a brilliant player, I think he’s an outstanding human being and so any thought that there’s a war between us, that could not be further from the truth.

“There’s sort of talk about relating the word coward with Pat Cummins. It could not be further [from the truth]. If you listen to the podcast, I was actually praising Pat. I was praising [Aaron Finch] ‘Finchy’. I was praising Tim Paine for giving me the feedback, it was magic.

“I was actually complimenting them, not criticising them as it’s come out. But you know it turns into a bushfire. What do you do?”

Langer said he was not “bitter and twisted” and saw his former players as his little brothers.

“I keep reading about Langer has got a let it go, and he’s bitter and twisted. Oh man, I’ve never been this happy in my whole life. I feel really happy,” Langer told Seven.

“The only thing I’m not happy about is what’s happened in the last few days. It just doesn’t make sense. I loved my four years coaching Australia, it was brilliant. It didn’t end as we would have liked, as I would have liked. That’s life, right? That’s the business. That’s a tough business, but I’ve got fond memories.

Langer said he exchanged text messages with Cummins after the podcast was published and has spoken with other players including Steve Smith.

He added he had recently received birthday messages from a number of players including Cummins.

Langer said he was happy to be starting a new role. “I’ve been in touch with these guys ever since I stopped being in the team and I can’t wait for the test match to start on next week,” Langer said.

“The reason I can’t wait is that I haven’t seen them the boys since I finished in February.”