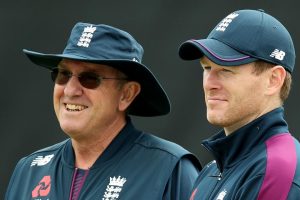 World Cup-winning former England coach Trevor Bayliss has laid roots back at home and will coach the Sydney Thunder in the BBL this summer.

Bayliss, the former NSW coach, guided England to its maiden World Cup title after that dramatic tied final at Lord’s in 2019.

He returns to the Big Bash having steered the Sydney Sixers to the title in the inaugural BBL season in 2011-12.

Bayliss’s most recent coaching role was at the Sunrisers Hyderabad, the IPL franchise that this season axed David Warner as captain and dropped him from the team before the tournament was suspended amid the country’s devastating coronavirus outbreak.

“It’s great to be home and involved in NSW cricket,” said Bayliss, who now lives in Sydney’s west.

The Thunder won eight games last season with a squad littered with emerging young players, and Bayliss said assembling his squad was his first job.

“It’s only early days yet … but most of the guys from last year are back, so that’s a good sign for this year coming,” Bayliss said.

“Over a two-month tournament like the Big Bash, you’ll need more than just 11 good players. It’s about having a strong squad.

“The Thunder have done well over the last few years … Hopefully, we can go one or two steps further this summer. To win as many matches as possible and compete in the final is my number one goal.”