Home » Сricket » With his mind at ease, Harris ready to repay Bailey’s faith during Ashes

With his mind at ease, Harris ready to repay Bailey’s faith during Ashes 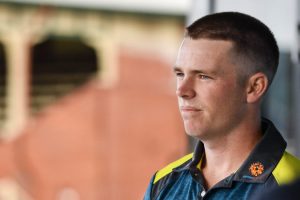 Marcus Harris has welcomed selection chairman George Bailey’s early Ashes endorsement, which has allowed the opener to head into a series with job security for the first time since his debut Test summer.

Instead of being made to wait to the 11th hour to learn his Test fate, Harris was told before Victoria’s Sheffield Shield season had started – and well before the Ashes squad was announced – he would be keeping his place at the top of the order.

The left-hander had been the favourite to partner David Warner once Will Pucovski was ruled out, though Usman Khawaja’s strong record as a makeshift opener and excellent start to the season kept him in the frame as well.

Despite a creditable start to his Test career against India three years ago, Harris has played just four Tests since the end of the 2018-19 season – each time stepping in mid-series to replace an opener who had been selected ahead of him.

Bailey has indicated Harris will be given an extended run to prove himself at the top level, which can be a double-edged sword. A fruitful Ashes campaign would cement his place in the side, but failure could also spell the end of his time in the baggy green. 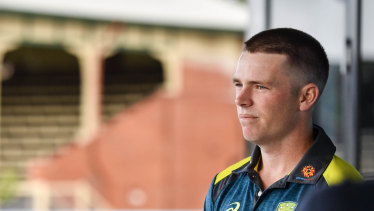 “I probably spoke to Bails about a week before we went away to Sydney for the first Shield game,” Harris said.

“We just had a really good conversation. It was just good to have some clear communication with a selector about what I was doing and what was in their thinking for me.

“It’s good for your confidence as a player to know where you stand and having the backing of people is really good. It puts your mind at ease a little bit. Your mind can run obviously coming into a big series on the Ashes with the amount of attention that’s brought to it, so to not have to worry about that for probably a month leading into the first game has been pretty good.”

Harris endured a rocky Ashes series in 2019. Called in for the third Test, he made just 58 runs in six innings and also dropped Ben Stokes during the memorable finish at Headingley.

Harris and Warner struggled with the around-the-wicket approach adopted by England’s Stuart Broad. That tactic is more dangerous on English pitches that do not offer as much bounce, forcing batters to play more often. On Australian tracks, batters can leave with more confidence, while the extra bounce needed to hit the stumps leaves less margin for error in over-pitching. 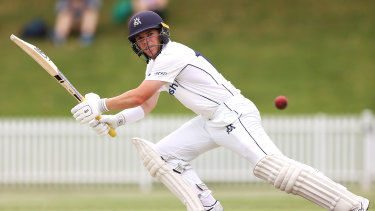 Marcus Harris has been guaranteed a start in the Test side for the Ashes series.Credit:Getty

Criticised by coach Justin Langer early in his Shield career with Western Australia for being “mediocre with flashes of brilliance”, Harris is now more committed to working through difficult patches in innings to compile the big scores required to play for Australia and stay in the side once selected.

“My initial idea of trying to get through the 20s was to dash as quickly as I could, but as I’ve got a bit older and more experienced I just let the game come to me a little bit more and let the bowlers come to me a bit more,” Harris said.

“That probably comes back to just having a hunger for making a lot of runs, making big runs and having patience. In the first Shield game I think I’ve faced 360 balls, so it’s not being satisfied with making 50 or 100.

“Through the off-season I had some really good innings where I made some big hundreds and over the last couple of years have made a couple of 200s. It comes back to having a bit of a bit of self-motivation and drive to do really well and lead from the front of your team.”