Home » Сricket » Unlikely but not impossible: How Smith can better Bradman’s Ashes mark

Unlikely but not impossible: How Smith can better Bradman’s Ashes mark

It will take something special for Steve Smith to match the peerless mountain of runs scored by Don Bradman in the 1930 Ashes but it's been a series in which the batsman has made the remarkable look routine.

Even by his own staggering standards.

Smith has scored 671 runs at 134.2 this series, a fair return given he missed out on three innings because of a delayed concussion, to ensure comparisons with Bradman have come thick and fast. 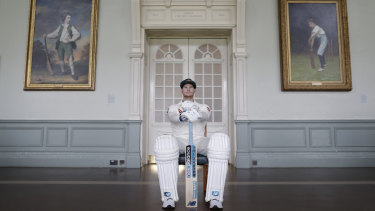 The superstar is returning to the Oval, scene of his maiden Test ton in 2013, then the launching pad of a stunning run of Ashes form.

Smith's recent rampage against England, which has featured 1501 runs at 136.45 from 13 consecutive innings, started with a match-winning 143 at the inner-city ground in 2015.

It was the first of seven Ashes tons during the streak, which has prompted immense praise from greats Steve Waugh and Ricky Ponting, plus captain Tim Paine and coach Justin Langer.

Smith opted against having a hit as Australia trained for the first time since retaining the urn in Manchester, a notable break with routine for someone renowned for marathon net sessions.

Langer cautioned against reading too much into the sight of the 30-year-old delivering throwdowns at the Oval rather than driving them.

"I'd say after spending that much time in the middle and the emotions of the last game – sometimes with batters it's more a mental rest than anything else," Langer said.

"I've got a feeling he might hit a few balls tomorrow. 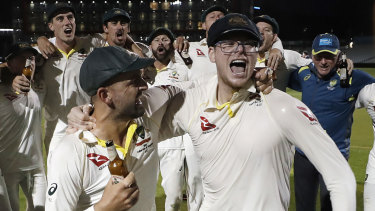 Unconventional: Smith in the middle of the team huddle as the Australians celebrate victory at Old Trafford.Credit:Getty Images

"Let's hope he keeps loving it [batting] in the next Test. I know he's got some strong goals for this series and moving forward."

Smith's first series since the Cape Town cheating scandal has been a dream but David Warner's has been a nightmare.

It has been 40 years since an Australian batsman has logged seven single-figure scores in a series.

"He probably hasn't been through this lean run before, so it's going to be a good test of his character. We know what a great player he is," Langer said.

"He hasn't got the runs he'd like at the moment but I'm looking forward to it when he does. There's no better place in the world to bat than the Oval. Looking forward to seeing him go well this week.

"He'll be fine … I've said throughout the whole series if Davey has one good innings he'll help us win the Ashes."