Trent Rockets ‘rallying around’ Rashid Khan amid turmoil in Afghanistan 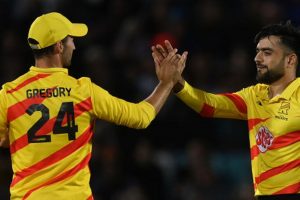 Khan is Afghanistan's captain in T20 cricket and he is currently playing for the Rockets in The Hundred.

On the same day that the Taliban seized Afghanistan's capital Kabul, Khan played for the Rockets in their win over Manchester Originals and took 3-16 to help his side qualify for the knockout stages of the competition.

During the game, Khan spoke to Kevin Pietersen, who was on commentary for Sky Sports, and told him he "can't get his family out of Afghanistan".

"For him to turn up and put on a performance like this under the pressure that he is currently under… for him to be able to forget that stuff and navigate his story and continue the momentum that he has – I think that's probably one of the most heart-warming stories of this Hundred so far."

Despite the ongoing upheaval in his home nation, Khan is set to play for the Rockets in their Eliminator clash with Southern Brave on Friday as they look to book a place in Saturday's final.

Speaking to Sky Sports, Rockets skipper Gregory admitted the 22-year-old is "not his regular bubbly self" and that the squad have been trying to "pick him up".

"We have a fantastic group of lads and they have really rallied around him, trying to keep him busy and look after him as much as we can," Gregory said.

"I know he has been around a long time but he is still a young lad. You can see he is not his regular bubbly self and all we can really do is try and pick him up.

"The guy is unbelievable. He has done it all around the world and he is doing it in England this year.

"When you throw in the circumstances with what's going on back home where his family are, it's nothing short of amazing. What he brings to his country and cricket is huge.

"He is fully focused on his cricket and hopefully we can get a trophy for him and put a smile on his face."