Home » Сricket » Time for a cut: Foxtel concerned by length of BBL

Time for a cut: Foxtel concerned by length of BBL

Bigger may not be better for the Big Bash League, with Cricket Australia under pressure to cut matches just two years after expanding the competition.

As the game's governing body and Seven West Media called a brief truce in their high-stakes feud, after what both parties described as a "constructive" meeting on Thursday, it has emerged the structure of the BBL is a bone of contention between Jolimont and its other TV partner Foxtel. 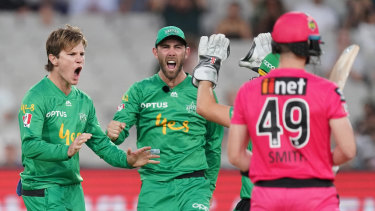 The structure of the Big Bash League is a bone of contention in cricket’s broadcast wars.Credit:AAP

They feel fans will not vote with their feet to watch neutral sides play, leading to half-empty stadiums.

The length of the BBL has been a talking point since CA expanded the competition from 10 rounds to 14 for the 2018/19 season, stretching it deeper into February. The league was extended last summer from 59 to 61 games, with the introduction of a new finals system.

Crowds and TV ratings were again down last season amid calls from players for the number of matches to be reduced, though CA points to one-million-plus attendances for a third time and average TV audiences of 185,000 more a game than the AFL and the NRL last year.

Seven has used what it believes will be the diminished quality of the BBL to drive its call for a reduction to its $82 million-a-year fee. It also has $25 million of production costs per year in the six-year deal.

As reported by The Sydney Morning Herald and The Age, sources with direct knowledge of discussions at Seven said the network had repeatedly called for the upcoming BBL to be scrapped.

Seven's managing director James Warburton and commercial director Bruce McWilliam met with CA chief Nick Hockley on Thursday. Sources at Seven said the network now had hope CA was at least open to a discussion about a fee cut.

Seven had previously seen CA as failing to listen to its claims. That has been eased somewhat, although a lack of progress remains a concern.

CA has verbally told Seven it is in breach of contract having not paid its first instalment of $25 million in full but has not inflamed tensions by issuing a formal notice. Seven this week said it would not pay another cent until its issues were addressed.

Seven has told CA how much it feels this summer's program is worth but CA has not budged, giving Seven no other option than to continue to press for an independent valuation.

Sources in the discussions said it could lead to an even bigger cut for CA than if it agreed to Seven's initial plan. Mediation or arbitration are also on the cards, with Seven not ruling out terminating its contract.

Seven has yet to be given a revised schedule – state government approvals remain the problem – but the Board of Control for Cricket in India has got its way and the white-ball series against Australia will be staged before the Test series begins. This has frustrated Seven as it now has only one Test to sell to advertisers before Christmas. Sources say the proposed one-off Test against Afghanistan looks increasingly unlikely to occur.

The free-to-air network remains aggrieved by the lack of goodwill, repeatedly pointing to the strong relationship it has with the AFL. The AFL agreed to an $87 million haircut on its deal because of COVID-19.