Home » Сricket » The inside story of how Warner was banned for life, and the case for reversal

The inside story of how Warner was banned for life, and the case for reversal 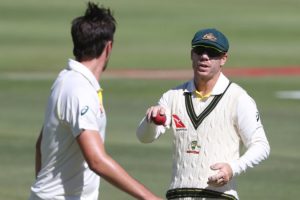 As Cricket Australia’s directors consider commuting David Warner’s lifetime leadership ban, it can be revealed that the board actually scaled down the penalties initially pondered for the Newlands scandal within the space of a few hours.

It’s hard to imagine the exact states of mind of the CA directors as they sat to consider penalties for Warner, alongside Steve Smith and Cameron Bancroft, after Iain Roy’s rapid code of conduct investigation of the men’s team in a Cape Town hotel room. 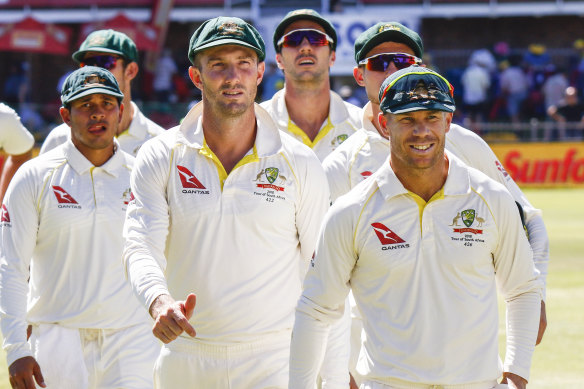 David Warner and the Australians during the 2018 South Africa tour.Credit:AP

Under the vast powers granted to them by the code, the directors led by then chair David Peever initially discussed banning all of Warner, Smith and Bancroft from playing, let alone leading a team, for life.

That sort of extraordinary sanction was suggested to CA by at least one top Australian corporate chief in the 24 hours after the scandal broke in South Africa.

But cooler heads, despite the outrage swirling across Australian cricket and society at the time, ultimately prevailed.

At Peever’s suggestion, the board ended the emotive meeting and elected to take a night’s sleep before settling, more calmly, on penalties. A five-year ban for Warner was also discussed, but ultimately, he and Smith were suspended from playing for one year, and Bancroft for nine months. 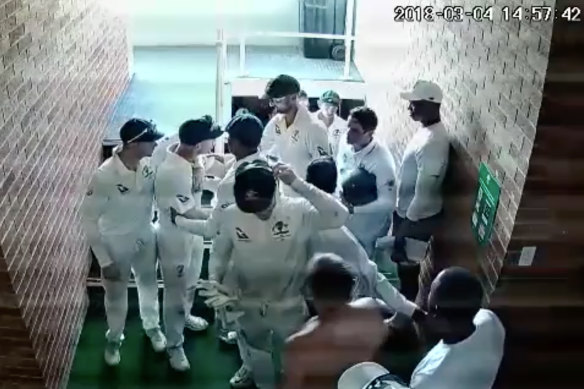 Another piece of context valuable to understanding Warner’s ban relates to events during the first Test in Durban. That match, in which a fiery and ill-tempered Australia bullied the Proteas on the field and, in Warner’s case, up the stairwell to the change rooms, can now be seen as the Alpha high point of an ugly era.

Then chief executive James Sutherland made his disapproval about the conduct of that match clear to Smith, the captain, and the coach Darren Lehmann was similarly called upon to better manage his squad.

Warner, moreover, was spoken to separately over the fact that while Quinton De Kock’s retaliation to his goading had been obscene and personal, regarding his wife Candice, he needed to stay “under the radar” for a time afterwards. This was construed by some as a warning not to transgress again.

Immediately before South Africa, Warner had led an Australian T20 side to a triangular series victory in New Zealand. Ricky Ponting had been lined up to be coach in the short format. As Smith’s deputy since 2015, Warner was clearly eager for more responsibility, but had also been cajoled more than once into acting as the team’s decidedly unpresidential “attack dog”.

Between 2013 and 2015, Warner had picked plenty of fights. But he pulled back for a time, earning the backhanded dressing room nickname “The Reverend” for his quieter stance. Warner explained why during the 2015 Caribbean tour:

“In the past I’ve been someone who’s been told to go out there and do this and do that, but at the end of the day I’ve got to look after myself, and that’s what everyone does,” he said. “There are people who do talk and don’t talk on the field. If I don’t want to be that instigator, I don’t have to be that instigator. So time will tell.”

By early 2018, of course, Warner and the rest of the players were predisposed towards taking very little notice of the CA board. They felt its directors, and one former member only recently migrated across to senior management in Kevin Roberts, had led an unseemly and ultimately pointless pay dispute in 2017. Ill-feeling about that episode still ran in both directions.

What Warner, Smith and Bancroft did listen to counsel about in subsequent days was in their individual decisions not to take the code of conduct charges and their penalties to hearings at which they would have been tested. In accepting the sanctions, they all fell under the relevant clause in the code

The binding nature of a charge and penalty, once a player or staffer has accepted it and declined to go to a hearing, is a fundamental of the code and its balance. It is far less common, certainly relative to the AFL tribunal for instance, for charges to be taken to a hearing, so much so that it is commonly (if mistakenly) referred to as an “appeal”.

Take this recent CA release about an over rates offence in the WNCL: “Cricket Victoria appealed the decision to the CA Code of Conduct Commissioner, but was unsuccessful in reducing the penalty.” 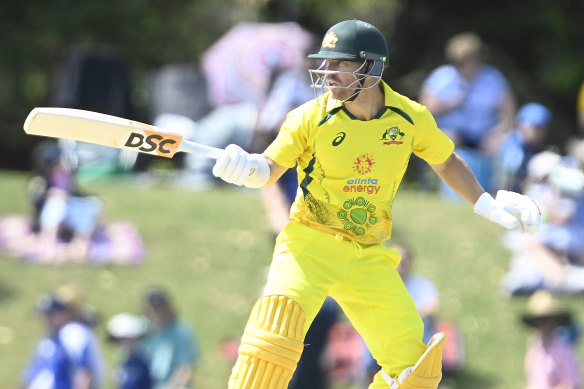 On that basis, Warner is barred from leadership positions in Australian cricket for life – unless the CA board asks its head of integrity, Jacqui Partridge, for a review of the code of conduct. Ahead of today’s board meeting, Partridge has drafted board papers regarding her department, the code and implications of reviewing and rewriting it.

CA’s chair Lachlan Henderson and his fellow directors – only one of which, John Harnden, was also a director at the time of Warner’s ban – have two options. Either they can proceed with a review and rewrite of the code of conduct, or elect not to take the matter any further.

“We need to be careful that we’re not reactive in relation to bans that have been imposed in the past,” Henderson said on Thursday. “We also need to also be aware that players and those subject to sanctions can change, can do very well in the future and we’d like to think that we need to adopt a principle of fairness, as we look at David’s situation particularly.”

As for any Australian team considerations, there is a bigger time window. They play an ODI series against England in late November, straight after the Twenty20 World Cup, but current 50-over deputy Alex Carey is likely to be leader. The next ODI series is not until late March, following the end of a four-Test series against India in India.

One of the greatest changes at CA in the time since the Newlands bans were first imposed is the increasing involvement of Simon Longstaff. First he was author of a cultural review that ascribed far wider organisational blame than Warner; more recently he was appointed ethics commissioner to Australian cricket.

Henderson said on Thursday that Longstaff would be consulted if the board chose to move ahead with a review of the code.

”I rather fear that the politics that infect this game and the rivalry between individuals and states, has probably got in the way of cricket rising to the better place I think it is capable of achieving,” Longstaff told The Project amid the Tim Paine saga last year. “And that saddens me.

“I think there’s got to be some kind of declaration from Cricket Australia, or from cricket in Australia, about what they expect to be the standard, and that will force us to reconcile ourselves to the answer to a question – do we expect ethical perfection, what do we make of the possibility of forgiveness when people have made mistakes and they’re genuinely remorseful, how do we manage the fact that human beings can be fallible.“

In April 2018, there was no possibility of forgiveness for Warner. CA’s board is about to decide whether that can still hold true in October 2022.