Home » Сricket » The Hundred: How Australian players have fared in first season of new cricket tournament

The Hundred: How Australian players have fared in first season of new cricket tournament 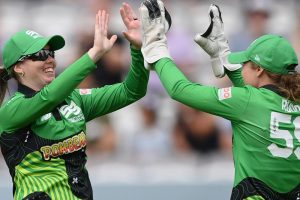 It was the new tournament that cricket purists fretted would be the great disrupter of the sport: a 100-ball, quickfire format without “overs” but with jazzy uniforms, high scores and fireworks.

However, England’s The Hundred concept has been a success, with energetic crowds packing grounds from Old Trafford to Trent Bridge.

The players, too, have been ­enjoying the new tournament with its new tactics, its fast pace and family-filled crowds watching double-headers of the women’s and men’s games.

And it includes a handful of Australians who received late call-ups to the tournament after the top Aussie and New Zealand international players pulled out due to the pandemic.

Amanda-Jade Wellington was among them, filling the leg-spinning space when White Fern Amelia Kerr withdrew from the Southern Brave squad.

Wellington, 24, was offered a replacement-player contract by Brave coach Charlotte Edwards; the pair know each other well as Edwards is assistant coach of Wellington’s Adelaide Strikers in the WBBL.

Participating in The Hundred, meant up to eight weeks away from her fiance Tayler McKechnie and their menagerie of pets, which includes a sugar glider.

It meant daily Covid tests and the isolation of a cricket bubble, then the mandatory two weeks hotel quarantine on arrival back from London. But Wellington didn’t think twice.

“You always want to be the first one playing in the new format, you don’t know how it’s going to go,” she said.

“But I think this is such a fantastic add into the cricketing world, it’s been a massive success and I’m excited to see where it goes in the future.”

The format has new rules.

An over is now called a “five”, and you don’t switch ends until 10 balls have been bowled. Each bowler can send down only 20 balls (or four fives).

At home in Adelaide, Wellington is an avid collector of Pokemon. Picture: Sarah Reed.Source:News Corp Australia

“As a spinner, it’s not tiring, but it’s more tactical,” Wellington said.

“If you’ve bowled a few dots and you can see that the batter is struggling, you can continue (with another five) and possibly a wicket can come, whereas normally you’d be at the other end sooner and the pressure on the batter is released.

“It’s a really exciting feature for The Hundred.”

Wellington has flourished in the English summer sun and sits top for best bowling figures of the tournament, 4-12, is third overall for most wickets taken, 13, and fifth for economy at 4.42.

Only India’s Deepti Sharma has bowled as many balls as her: 155 in total across the eight pool matches (or 19 balls a game).

“I’ve really enjoyed the opportunity and I feel like I’m in a really good headspace with my bowling and my cricket in general,” she said.

“Wello’s” impressive form has been key to the Brave’s success. It has finished top of the standings, with only one loss, and will play for The Hundred’s inaugural title overnight at a sold-out Lord’s.

Amanda-Jade Wellington snared the best figures of the tournament with a spectacular 4/12 against Oval Invincibles on August 16. Picture: GettySource:Getty Images

“For someone like me, coming over from Australia, having never played at Lord’s, to get the opportunity to play at Lords … to be on the field and feel the roar, I can’t wait for that,” Wellington said.

As for the cricket itself, Wellington says she has not had to change much to fit in with the new concept.

“At the end of the day, it’s just another game of cricket: batters bat, bowlers bowl, fielders field,” she said.

“It’s one ball less an over for bowlers, 20 balls less for batters, and yet the scores are almost the same as T20 cricket.

“The way The Hundred has been approached by the cricketers has been fantastic.”

Sammy-Jo Johnson has been sensational for the Trent Rockets. Picture: GettySource:Getty Images

AUSSIE WOMEN AT THE HUNDRED:

Taken six wickets and is the fourth-highest run-scorer for the Phoenix, with an average of 22.16, scoring 133 runs from 106 balls faced.

Has best figures of 2/21 with the ball and taken two catches in the field.

Might have had only four innings from six matches, but she’s hit a total of 61 runs from a combined 35 balls faced, including 10 fours. Has the second-best strike rate in the comp.

The Canberran has enjoyed seven innings from her eight games, hitting at more than a run-a-ball. Known for her quick running and fielding prowess has taken two catches.

Leading the competition’s best bowling figures with 4/12, and sits third on the most-wickets with 13 scalps. Her economy’s not bad either; at 4.42 she’s ranked fourth in the comp.

• It’s 100 balls per innings. Whoever scores the most runs wins.

• The fielding side change ends after 10 balls.

• Bowlers deliver either five or 10 consecutive balls. The captain decides.

• Each bowler can deliver a maximum of 20 balls per match.

• Each bowling side gets a strategic time-out of up to two minutes, which can be used at any time after the powerplay.

• The coach can walk out to the middle of the ground and discuss tactics with their players mid-match.

A 25-ball powerplay for each team.

Two fielders are allowed outside of the initial 30-yard circle during the powerplay.

A match of The Hundred will last two and a half hours. The bowling rate is crucial and if a bowling team is running behind schedule they are penalised with an extra player inside the circle.

The Southern Brave are favourites to take out the inaugural tournament women’s trophy. Picture: GettySource:Getty Images

WELLINGTON’S JOURNEY TO THE HUNDRED

A little over a year ago, Amanda-Jade Wellington stood in front of her South Australian teammates and told them she was taking a break from cricket.

Having burst on to the scene in 2012 aged just 15, she became the youngest person in history to debut for SA and earned comparisons to fellow leggie Shane Warne.

But cricket was all she knew – and suddenly the hunger wasn’t there.

“Last year, I got to a stage where I felt like I couldn’t evolve my cricket anymore,” the 24-year-old said.

“I was coming to training to tick a box. I just felt like there was no need to improve my game.

“I felt like, I’d been doing cricket for so long … I was just rocking up, going through the motions.”

After nine years in the game, and still only in her early-20s, Wellington approached her SA coaches Luke Williams and Jude Coleman, voicing her need for a break.

She took more than three months off during the 2020 pre-season, training on her own and spent a lot of time developing positive strategies with a sports psychologist.

“I was just trying to figure out if cricket was something that I wanted to do, if it was making me happy for the right reasons,” she said.

“I was trying, also, to find the Amanda away from cricket. I felt like I had to take care of myself.

“Luke and Jude were very supportive of me having time off and realising that I was struggling.

“They wanted me to come back with the intentions of playing cricket forever, and it was awesome to have that encouragement and support behind me.”

Wellington has well-documented hobbies outside of cricket, thanks to her sharing a somewhat quirky home with her fiance, Tayler McKechnie, and their four dogs, three cats, two snakes, two sugar gliders, one rabbit and more than 6000 pieces of her Pokemon collection and she spent a lot of time hanging out with all of them.

She then returned to the SA squad in time for the 2020-21 WNCL season and the 2020 WBBL season, with most people knowing nothing of the very private struggle she’d been through.

Putting The Hundred into a spin. Picture: GettySource:Getty Images

She’s emerged a happier athlete, one who’s now able to leave a bad performance on the pitch rather than dwelling about it long after the final ball has been played.

And it’s why she jumped at the opportunity to head to England in early July to play for the Southern Brave in the new 100-ball tournament, The Hundred, which concludes on Sunday with the women’s and men’s finals.

Wellington received a late call-up to the Brave amid a flurry of Aussie and New Zealand internationals exiting the competition citing the Covid-19 global pandemic.

But she grabbed the chance and has flourished in the English summer sun, enjoying a bowling rejuvenation.

She sits top for the tournament’s best bowling figures, a phenomenal 4/12, sits third overall for most wickets taken, 13 (including two lots of four-fors), and is fifth for economy with 4.42.

Wellington plays for Adelaide Strikers in the WBBL. Picture: AAPSource:AAP

It’s no wonder – along with a batting line-up that includes England’s Danni Wyatt and Indian Smriti Mandhana (although she’s headed home early to prepare for September’s India/Australia series) – the Brave has qualified for the final with only one loss on their sheet.

Wellington will now play for the inaugural title at Lord’s overnight on Saturday, in front of a sold-out crowd of about 30,000.

“Cricket can take you to some amazing places,” she muses.

“And you need to step back sometimes and realise where you are, who’s been there and what the whole location has been through, but still be focused on the present and worried about the game you’re playing.”

Thinking back 12 months, Wellington is grateful.

“To have spent time to myself to find out if cricket was what I wanted to do, I’ve realised it is and I hope I can still be doing this in 10 years time.”