Todd Woodbridge has always been a cricket "surface watcher", catching various Tests when he can. But over the last two months, he’s been brushing up on his knowledge of the sport before stepping into the host’s chair for Channel Nine’s Ashes coverage.

"I was somewhat blown away and thrilled to get the call," he said. "It wasn’t something I had thought about." 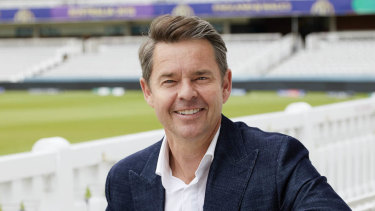 Former tennis champion Todd Woodbridge is swapping a racquet for a bat as he takes up a new role hosting Nine’s Ashes coverage. Credit:Nine

The 22-time grand slam doubles champion is no stranger to television, having commentated on numerous major tennis tournaments and hosted the Olympic and Commonwealth Games. But despite his experience, Woodbridge said he still gets “nervous”.

"[I’ve] moved outside of being a former tennis player and have become a broadcaster who can stand and hold their ground," he said. 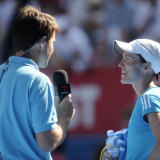 Todd Woodbridge has spent many years providing commentary for numerous tennis tournaments, but now it’s time for a change of sport. Credit:Pat Scala

"In a way, that’s actually why I love live television and commentary – it’s the only thing I can do post-professional tennis career that gives me the same adrenalin."

"Some days it’s [commentating] just easy – like winning, and some days you think ‘I am struggling’, and sometimes there are bad days and you just have to stay confident and keep working at it."

"You get nervous, but there is euphoria when you pull it off."

While the move to the cricket may seem an odd choice for the tennis champion, Woodbridge says he's always liked the sport. Like many, his appreciation for cricket started in the schoolyard, where Woodbridge's excellent hand-eye coordination saw him rarely being dismissed, making him very "boring" to other kids.

Woodbridge said he’ll be "steering the ship", but won’t be “talking [game] technique”.

Instead, he’ll provide insight into the minds of the athletes and coaches, an area he’s very familiar with.

"My strength lies in understanding the stress and pressure that comes with key moments, and reading body language, to go below the surface of what the athletes are going through".

After Australia’s loss to England in the World Cup semi-final, Woodbridge said the Ashes would be interesting to watch.

Although the result was not ideal, it was a "blessing" for David Warner and Steve Smith to make their first international appearance since the 2018 ball-tampering scandal. Although they were jeered by the crowd, it has "taken a bit of pressure off them" going into the Ashes, Woodbridge said. 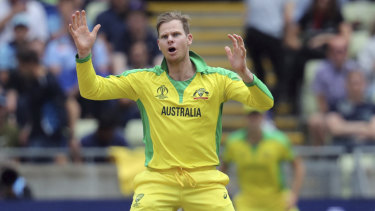 Steve Smith’s appearance at the World Cup may have been met by jeers, but it’s been a good warm-up to the Ashes, says Woodbridge. Credit:AP

While Woodbridge’s immediate focus is shifting to cricket, he’s still a champion tennis player. Teaming up with Jonas Bjorkman, the duo won the invitational legends doubles tournament at this year’s Wimbledon despite having limited time to practise together. He said the experience was "amazing".

"It’s a habit I can't give up," he said. "I wouldn't be anywhere without that sport." 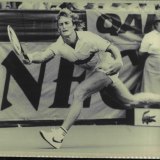 Peter McNamara stretches for a passing shot in a Davis Cup match in March 1986.

The recent death of the former player, mentor and coach Peter McNamara rocked the tennis world. For Woodbridge, McNamara and doubles partner Paul McNamee – known as 'The Super Macs" – were his idols.

As a young player, Woodbridge wanted to "emulate people and their results", particularly the Super Macs.

"You need people in sports to be like them and to follow in their footsteps," Woodbridge said.

There’s no doubt about Woodbridge’s tennis footprint. He won 83 ATP men’s doubles titles, including 16 grand slam tournaments, as well as six grand slam mixed doubles finals. In 1992 he was ranked No.1 in doubles.

For many of today’s tennis players, Woodbridge is a role model and inspiration.

"Australians were longing for a sports person like [Barty] to come back," he said. "In an era of equality, she stood out as a shining star."

Nine’s exclusive live coverage of the Ashes begins on August 1 at 7.30pm.