Home » Сricket » Strong bond: Why Bumrah is the ‘best bowler in the world’

Strong bond: Why Bumrah is the ‘best bowler in the world’

Shane Bond, the former New Zealand great and now fast-bowling whisperer to Jasprit Bumrah, remembers a time when there were questions over whether the sling-armed Indian spearhead would even just be a "good" Test bowler.

"He hadn't played yet and people say: 'Will he be any good?' There was a lot of talk about his action and that he will get injured and this sort of stuff," Bond said. 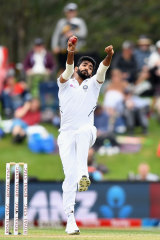 Jasprit Bumrah’s action and pace have tormented batsmen around the world.Credit:Getty Images

"I have tried longer run-up and nothing changes, speed is still the same so why to run so much."

Bond, as the Mumbai Indians' bowling coach in the Indian Premier League, has worked with Bumrah for six seasons. It was no surprise to him that his charge, when given the chance by Indian selectors in 2016, quickly made a name for himself. He is the first Indian to have taken Test five-wicket hauls in South Africa, England, Australia and West Indies and, in 2018, had become in the eyes of many – including Bond – the best bowler in the world.

A lower-back stress fracture curtailed him last year but, having come off winning IPL final this month, he has arrived in Australia ready to build on a formidable record of 68 wickets at 20.33 in only 14 Tests, not to mention an impressive record in the white-ball formats.

He wreaked havoc on the Australians through four Tests here two years ago, claiming an equal-series leading high 21 Test wickets at 17, striking with the new and old balls. Former Australian spinner Kerry O'Keeffe said he had made the yorker "hip" again.

The Australians this time expect to be better equipped to handle him in all formats, as they now understand the pace and angle he generates. His natural movement is to slant the delivery into a right-handed batsman or away from a left-hander but it's his ability to hit the seam and have the delivery straighten which makes him dangerous, particularly if he comes around the wicket to David Warner.

Josh Hazlewood says the Australians will look to tire Bumrah out by batting for long periods, a plan strengthened by the return of Test greats Steve Smith and Warner, who missed the 2018-19 series, while Marnus Labuschagne is now an established star.

Bumrah, though, continues to develop and has already been crafting fresh plans. Bond, also the Sydney Thunder Big Bash League coach, has urged him to make use of his "dipping" slower ball.

"He doesn't run in fast. He sort of trots in and then the last few steps he really accelerates. He, obviously, has those straight arms which are a bit different. But for a guy that is not that big and doesn't run in too fast, he has got good acceleration and he is genuinely quick.

"I think that sometimes that can shock you as a batter. But the other thing is he has the ability to shift the ball both ways."

Smith is already preparing to be targeted by the short ball, as he was by England and New Zealand, and he will need to decide whether he attacks or defends.

Joe Dawes, the former Queensland fast bowler and one-time Indian bowling coach, said the Bumrah bouncer was one of the hardest deliveries to counter.

"He is always coming in at you … a bit like Courtney Walsh, [his release is] just pass the vertical, coming in at you, then he gets one to hit the seam and hold its line. It makes it really hard to play," Dawes said.

"As a right hander, if the ball is always coming in at you, and he gets his line right, there aren't many places to go. You duck or you lean back. Especially if it's skidding, it's hard work."

It promises to be that kind of summer for the Australian top order.