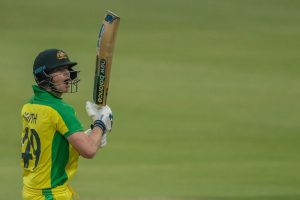 Steve Smith hit a stunning 131 but Australia otherwise toiled in their quest to fashion a commanding advantage on the second day of the third Test against India in Sydney.

Smith returned to form with a 27th Test century, propping up his side who had resumed on 166 for two and were all out for 338 before India reached 96 for two at the close.

Following Marnus Labuschagne’s dismissal for 91, the hosts lacked resistance and they would ultimately lose their last eight wickets for 132 runs.

The star of the Indian attack was Ravindra Jadeja, who took four for 62, including Labuschagne, who was caught by Ajinkya Rahane, while he also ran out Smith.

Boosted by their strong performance in the field, India looked intent on capitalising on their advantage as half-centurion Shubman Gill and Rohit Sharma put on 70 for their first wicket.

The pair fell in relatively quick succession but some solid batting from Rahane and Cheteshwar Pujara helped the tourists keep their momentum intact at stumps, when they trailed by 242 runs.