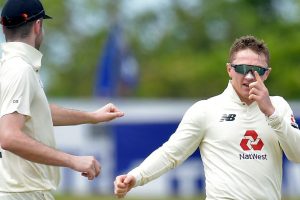 DOM BESS wasn't at his best, but grabbed his first opportunity to spin England towards glory in the subcontinent with both hands thanks to some abject Sri Lankan batting.

In time Bess' 5-30 will just be seen as an off-spinner doing spinner's things on a spinning pitch, but his sheepish celebration at getting his career best figures told the story.

And the sight of Niroshan Dickwella cutting a rank long hop straight to Dom Sibley at backward point summed up the quality of Sri Lanka's innings as well as the good fortune enjoyed by England.

Stuart Broad set the tone with two early wickets and then a third after lunch to leave the scorebook recording that Sri Lanka were dismissed for just 135 inside 47 overs, the lowest ever first innings score at the ground.

And by the close of day one a 50 th Test fifty for Joe Root and an unbroken century partnership with Jonny Bairstow meant their side were already just eight behind on one of the great days for English cricket in Asia.

No non-Asian spinner has taken five wickets in the first innings of a Test on the subcontinent quicker than Bess managed in his 10.1 overs and even though he got plenty of assistance with it, he should puff out his chest at the record.

“I didn't feel like I bowled very well,” Bess admitted. “I was pretty nervous and there was that short rubbish one that got cut.

“I didn't feel I bowled as well as I know I can, but that is cricket isn't it? That is how it turned out and there might be days I bowl exceptionally well and go 1-100.

“If a seamer bowls a wide half volley and it gets a wicket then no-one says anything, it is a wicket at the end of the day so I'll take it when it comes.

“It is an incredibly proud moment because I've taken five wickets for England and no-one can take that away from me.”

Bess stole what ended up being a pretty bizarre show with wickets falling to terrible shot selections, catches ricocheting off short-leg's ankle, and batsmen being run out at the non-striker's end from a fingernail deflection. All told the luck was definitely with England.

Perhaps this is what happens when a team has just a few days of training before a match having had a few days of quarantine before that as Sri Lanka had. Perhaps that is a cop out.

Sri Lanka are the home side who understand the conditions and what it takes to be successful in Galle better than anyone else, they batted as if they had never seen the place before.

Sri Lanka's woes began when they lost their captain Dimuth Karunaratne before the game to a broken thumb so former skipper Dinesh Chandimal stepped up.

And batting coach Grant Flower admitted: “I'm at a loss for words. I've never seen us bat this badly. They know the conditions, this is their home ground and they should have had a big advantage over England but we batted terribly.”

In contrast, Root and Bairstow, two Yorkshiremen who could not have grown up anywhere more different to Galle, played the conditions beautifully.

They adapted and soaked up the pressure after both Dom Sibley and Zak Crawley had fallen cheaply to the left arm spin of Lasith Embuldeniya.