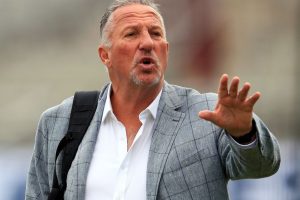 Ben Stokes’ bowling will be instrumental if England are to win the Ashes in Australia, according to Sir Ian Botham.

Botham, who inspired England to a famous 3-1 victory over Australia in 1981, never doubted Stokes’ involvement in the tour after the Durham all-rounder announced he is set to return to competitive cricket.

Stokes took an indefinite break from the sport back in July to rest his finger and prioritise his mental health.

“First and foremost, I never thought he wouldn’t be there,” Botham said of the 30-year-old. “And that’s not inside information, because we didn’t see him at Durham until after the second operation.

“Ben is a match-winner. I hope that he’s fit enough to bowl and strong enough because I think that will be crucial. Because he’s an aggressive bowler.

“Everyone talks about his batting – we know about that – but I think his bowling needs to be used in four or five-over bursts on those Australian pitches when the ball is reasonably new as well.”

Botham, the chairman of Durham County Cricket Club since 2017, does not believe iconic bowling duo James Anderson and Stuart Broad should feature in every Test.

They 65-year-old called for England’s squad selectors to be bold and ‘brave’ when considering their options in attack.

“There’s no point in us turning up with four 80-mile-an-hour bowlers because once that Kookaburra ball, after 10 overs, is going to get smashed to all parts at that pace,” the legendary former England all-rounder continued.

“You need people like Mark Wood, Ben Stokes, (Ollie) Robinson – these are the guys that are going to play.

“You’ve got to look after Jimmy, he’s what, 39 now, so he needs a little bit of TLC, but he will have a part to play.

“Above everything else, he’s a senior pro and he can offer so much advice to the other guys, so it’s essential he’s there.”

The first Test starts at The Gabba in Brisbane on December 8 with the fifth and final Test scheduled for Perth’s Optus Stadium on January 14.

‘Inside the Tour – The Ashes 1986/87’ will be released across all major podcast outlets on December 3. For more information and to subscribe to the series visit auddy.co.