Sharma stars as India level series with win over Australia 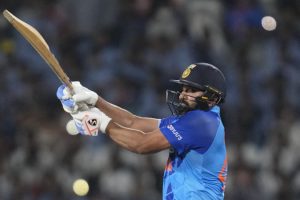 The hosts gained a six-wicket win in a match reduced to eight overs a side following a two-and-a-half-hour delay caused by a wet outfield. 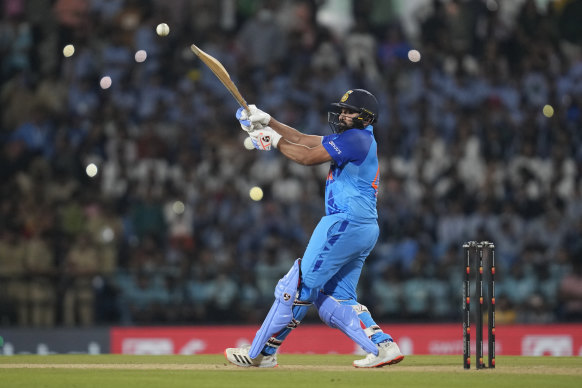 Indian skipper Rohit Sharma in action during the second Twenty20 against Australia.Credit:AP

Wicketkeeper Matthew Wade (43 not out off 20 balls) and captain Aaron Finch (31 off 15) scored freely as Australia made 5-90 in Nagpur Saturday morning (AEST) after being sent in.

Wade followed up his match-winning unbeaten 45 in the series opener with another boundary-laden innings highlighted by three sixes off Harshal Patel in the final over.

He bowled both KL Rahul and Virat Kohl and trapped Suryakumar Yadav lbw, the last two falling to successive deliveries. 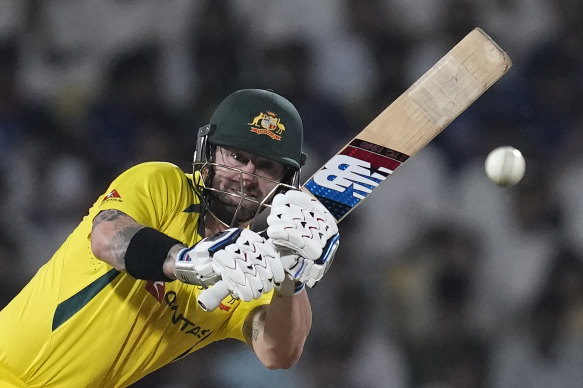 Matthew Wade had impact for Australia.Credit:AP

But Sharma (46 not off 20) took consecutive boundaries off Sean Abbott in the next over and though Pat Cummins had Hardik Pandya caught, India would not be denied.

They needed nine to win off the last over and Dinesh Karthik sent the crowd into a frenzy with a slog sweep over deep backward square leg off the first delivery bowled by Daniel Sams.

He sealed the win with another leg-side boundary the following ball.

“There was just a little bit of execution with bat and ball I think at times that probably just swung the momentum of the game,” Finch said.

“I thought obviously the way that Rohit played was pretty special and also [spinner] Axar [Patel 2-12 off two overs] the way he bowled, he was outstanding.”

“The outfield was very very wet down in some pockets of the ground and the ground staff did an amazing job to get it to a condition that we could play.”

Finch notched 24 of his team’s first 31 runs, including an audacious scoop over the wicketkeeper’s head in the first over and a straight six off Yuzvendra Chahal in the third.

His decisions to move Glenn Maxwell (0 off 1) and Tim David (2 off 3) up the order didn’t pay off, as both were bowled by the impressive Patel.

Patel (2-13 off two overs) also bowled Tim David and the stumps were rattled again when Finch had his leg peg uprooted by the recalled Jasprit Bumrah.

The stumps were rattled again when Finch had his leg peg uprooted by the recalled Bumrah.

“I think it’s important that you’re always looking at ways to improve, and obviously, we went with Maxwell at three and Tim David at four, so we were trying to be a bit more aggressive up front,” Finch said.

“We haven’t played too many shortened games so I think especially leading into a World Cup we’ve put some thought into it over some time.”

The home team quickly got ahead of the rate with 20 runs and three leg-side sixes in the first over, with Sharma swatting two in a row off Josh Hazlewood and Rahul following suit of the final ball.

Sharma also hit a six off Cummins and Zampa.

The final match of the series will be played in Hyderabad starting late on Sunday evening (AEST).