Ross’ father, Ashley, who left Adelaide to work as New Zealand’s player development manager from 1998-2007, oversaw Bond’s battle to improve his action and lessen the chances of being sidelined by further problems. 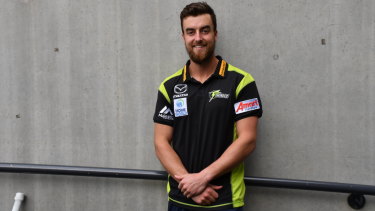 Ross clearly recalls how Bond’s effort to fight back was rewarded when critics eventually recognised him as the country's best fast bowler since Richard Hadlee.

It was one of many efforts that Ross saw as a boy with seemingly unlimited access to the Black Caps, and it enabled him to appreciate the professionalism that was required to make it as an elite cricketer.

The 27-year-old middle order batsman’s relationship with Bond – now the Thunder’s head coach – has a special significance because they’ve been reunited after Ross signed a three-year-deal with western Sydney’s BBL team.

"Bondy was often at our place for dinner, which was cool because it was the time when he was making Ricky Ponting – who was one of my idols – look pretty silly," Ross said. "It’s great to reignite that partnership, although I worked with him [when Bond was an assistant coach] at the Brisbane Heat. That [time] would’ve given him an idea about me as a cricketer, too."

Bond said there were many reasons behind his decision to target the player who was crowned Australian cricket’s 2016 Bradman Young Cricketer of the Year.

"I was happy to get him, and the boys were, too, because he’s a great signing
who’ll do well for us. The Thunder has some of the best young talent in Australia. In and around
those guys – and with Shane Watson [retiring] – we want guys who’ve been around the Big Bash and played a lot.

"We want experienced blokes who the [young] guys can learn off – and lean on. Alex is all of that. He’s also a middle-order batsman and that isn’t an easy spot to fill. He fills all the things we were looking for very effortlessly. Signing him was a no-brainer."

Beside the opportunity to again work with Bond, Ross said the Thunder’s approach to cricket was a key reason for him relocating to Sydney’s west.

"From what I’ve seen of the Thunder, it doesn’t seem to matter what score they’re set they go out and really chase it," he said. "They’re competitive in every game."