Home » Сricket » Pucovski will have to push through pain to play in series decider: Langer

Pucovski will have to push through pain to play in series decider: Langer 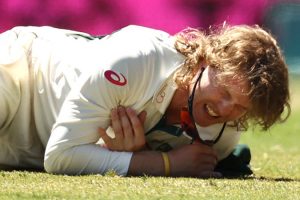 Young gun Will Pucovski may have to push through the pain barrier in order to play in the fourth Test, with Marcus Harris sweating on a recall if his state teammate is ruled out.

As Australia's weary quicks were asked to channel the spirit of Rick McCosker, who famously batted on with a broken jaw, Pucovski is rated a 50-50 chance of overcoming a partial dislocation to his right shoulder to take his place at the top of the order against India at the Gabba. 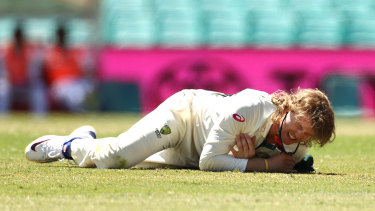 Will Pucovski is in doubt for the fourth Test due to a shoulder injury.Credit:Getty

The rising star, who made his debut last week in Sydney, did not bat or field at training on Wednesday.

Pucovski will almost certainly not play if medical staff believe he is at risk of doing more damage to the joint. If not, the question then will be how much pain he can tolerate at the crease and in the field. Pucovski was already due to undergo scans before he fell on the shoulder in the field on Monday.

"Will, he's a young guy, he's just played his first Test," Langer said on Wednesday. "Mentally, he's going to be exhausted anyway – it's a tiring business.

"We'll keep an eye on how he pulls up today. With shoulders, as long as he can bat OK and can catch – it's not as big a deal in Test cricket for us. We'll probably know by tonight if he's right to go. It'll either be a quick turnaround and he's backing up and into it or it'll be a few weeks.

"It might be a bit of bursitis or something."

Langer expects David Warner to play despite the opener expressing doubt before the Sydney Test about his ability to play in both games. Warner was in discomfort while batting in the first innings but was able to perform his duties in the field without issue, albeit in a new position.

"I said before the last Test match he'd have to deal with a little bit of pain," Langer said. "The muscle part of the injury has cleared 100 per cent. He had another scan two nights ago. His tendon will be sore. That's what happens with tendon injuries – he will be in pain.

Harris will come into the side for his first appearance in the baggy green since the fifth Ashes Test in 2019 if either opener is unavailable. The left-hander was considered by some to be unlucky to be overlooked for Joe Burns at the start of the series, then was kept on the bench after Warner and Pucovski were cleared to play in Sydney.

It spells bad news for former vice-captain Travis Head, who lost his place to Matthew Wade. Wade, however, failed to fire in the third Test in Sydney and will need a big score to shore up his position for the series against South Africa, assuming it goes ahead.

Langer is also confident quicks Pat Cummins, Josh Hazlewood and Mitchell Starc will overcome the short break between games to capitalise on a Gabba track that traditionally favours Australia's speedsters.

"I think of guys like Rick McCosker, Steve Waugh, Allan Border, they set a pretty high standard of what we expect from Australian cricketers," Langer said. "I suspect they'll be ready to go for this Test match."