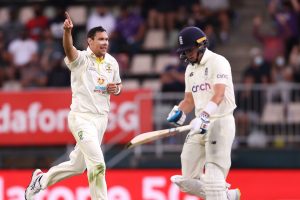 Pope was recalled for this Test after the thumb injury Jonny Bairstow sustained during the previous Test ruled him out.

However, the 24-year-old failed to make the most of his opportunity, getting caught behind off Scott Boland for 14 after playing at a ball he could have left to leave England 110-6.

Ponting labelled Pope's dismissal "an absolute nothing shot" and suggested he had "fallen for a pretty simple trap".

Speaking on Channel 7, Ponting said: "That's poor batting. Let's have a look how wide that is. There's no need for him to be pushing at that ball whatsoever.

"That is just an absolute nothing shot. It's a defensive push to a ball that's on about sixth stump.

"You're not going to score from it, all you're going to do is nick that through to Carey, which is what he's done.

"Ollie Pope you can shake your head as much as you like, but that's your mistake young man. What on earth are you doing there?

"There was a little bit of outswing earlier in the over, he knows what Boland's trying to do. He's just fallen for a pretty simple trap.

"All [Pope's] done is present Alex Carey with one of the easiest catches he'll take in his Test career."

"Pope driving at a ball he didn't need to," she said. "It was wide and outside off stump. He didn't need to play it and that's why he's frustrated and punches the bat."

Pope has struggled in the Ashes so far, managing just 62 runs in five innings at an average of 12.40.

The youngster is hugely talented but has not been in great form in Test cricket recently, having scored 368 runs at an average of 21.64 last year.