Home » Pietersen lambasts England's whinging about the pitch against India 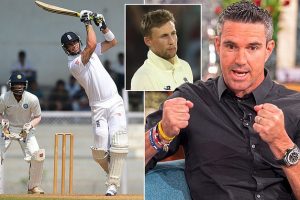 Kevin Pietersen mastered India and now he has a brutally simple message for England after their shambolic third Test performance: ‘Stop moaning and whinging and start trying to hit some straight balls!’

Kevin Pietersen is preparing to fly out to India this weekend. He will, once more, be an England captain on the Subcontinent just as he was in the winter of 2008 when he steered the side through the aftermath of the terrorist attacks on Mumbai. This time, it is as the country’s skipper in a tournament called the Road Safety World Series that is stacked with other legends of the game and he is relishing it.

Pietersen loves India. He scored 186 at the Wankhede Stadium in Mumbai in 2012 during England’s victorious tour in an innings recognised by many as one of the finest by any visiting batsman. He was one of the first England players to appear in the Indian Premier League, which brought him into conflict with the ECB. So when it comes to playing there, he has walked the walk and now he is talking the talk.

He was a compelling pundit in talkSPORT’s excellent coverage of the chaotic Third Test between the two countries in Ahmedabad last week, which ended inside two days and was won by India by 10 wickets. England were bowled out for 81 in their second innings amid so much dismay about the state of the pitch that England coach Chris Silverwood said on Friday he was considering making a formal complaint to the ICC. 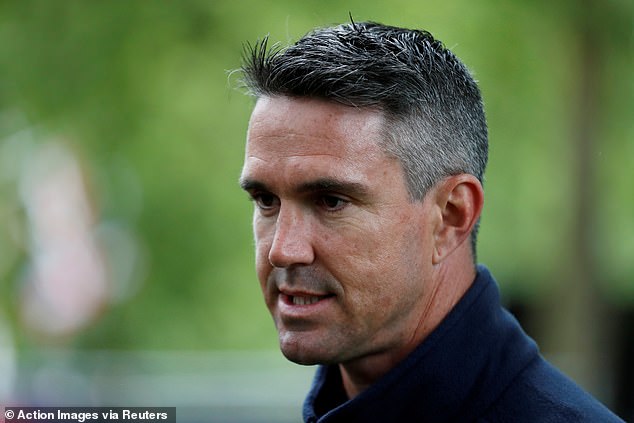 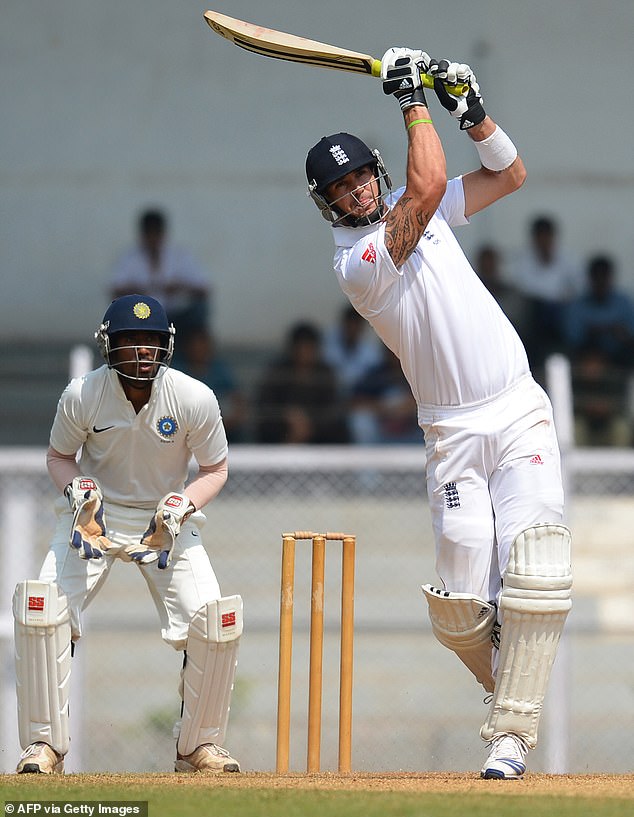 Pietersen poured scorn on that approach when he talked about it before he set off for Raipur, where the legends tournament will be held over a fortnight next month. He diagnosed a lack of honesty in England’s reaction to their defeat, criticised the selection of all three of James Anderson, Stuart Broad and Jofra Archer in Ahmedabad and suggested England should attempt to spend the time between now and the start of the Fourth Test eradicating flaws in their batting.

‘If Chris Silverwood is now starting to complain and moan about the pitch,’ said Pietersen, ‘if the head coach is going to moan and complain, that is as defeatist an attitude as I have ever heard of. He should wind his neck in. If you point your finger at someone else, four fingers point back at you and that’s what England need to remember.

‘If it was me after this Test match, as an England player I would say, “You know what, I played badly, I have got a week now to try and play and practise as best as I can so that we can try and win the next Test match. Because winning the next Test match and winning two Test matches in India and drawing the series is a damned good feat”.

‘Instead of the negative, defeatist attitude, instead of blaming the ICC, blaming the pitch, trying to get India deducted points, all the nonsense surrounding that, I would be thinking, “Fine, 21 of us missed straight balls, let me go and sort my defence out against the straight ball and the spinner”. Virat Kohli spoke about it. Rohit Sharma spoke about it. They both said both teams didn’t bat well. So be honest. You’re allowed to be honest as a sportsman.

‘How many of the guys got out to wickets where the ball bounced and turned and they nicked it to slip and it was unplayable? How many of those were there? I’ll tell you the answer. None. They all got out to straight balls. So work on your defence. Use your bat, play straight, defend straight, play late, bat like Joe Root. Pretty damn simple.’ 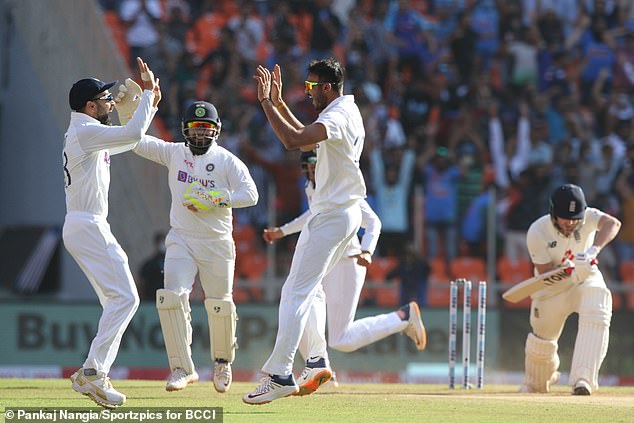 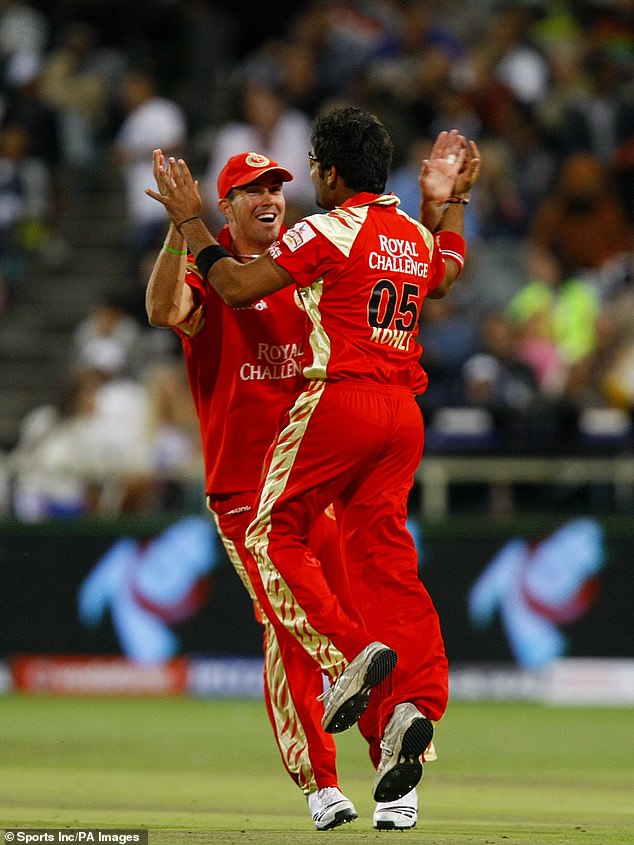 Pietersen was one of the first England players to take part in the IPL, then an issue for the ECB

Pietersen has not lost any of his self-belief in the years since he retired and he pointed to his own innings in Mumbai as a template for how England’s batsmen should have adapted to the challenging circumstances that faced them in Ahmedabad. He laughed off suggestions from another England legend Darren Gough that he would not have had anything like the success he enjoyed in India if he had batted on a pitch like the one England faced last week.

‘Go and show Goughie the wicket I played on in Mumbai,’ said Pietersen. ‘Go and have a look at a lot of the balls that were bowled in Mumbai. And guess what, I found a way and I defended every single ball that was straight. Every single ball that pitched and bounced and went over my shoulder, I parked it to one side and said “I’m never hitting that so who cares? Who cares if that goes through the top?

‘Neither that pitch in Mumbai eight years ago nor the one in Ahmedabad were dangerous. No one was worried about getting hurt on Thursday. And who cares about the ball that pitches and goes straight to slip? You are not going to hit it. But find a way to intimidate the bowler.

‘How many of the England batsmen came down the wicket and punched it to mid off like Rohit Sharma did when he batted in the first innings? How many tried to rotate strike by using the crease, coming down the wicket? They were just sitting ducks waiting to get done.

‘Go and have a look at my innings that I played in Mumbai in 2012 on an absolute Bunsen burner. They say it’s the greatest innings played by a foreigner in India. There are only two great Test match batsmen on show here: Virat Kohli and Joe Root. There are some very good players in the rest of the batting line-up. But on that kind of wicket, when it’s going to be testing your skill and your technique and your resolve, you need better players and better players would have been able to adapt at some stage.

‘I like this England team. I love Joe Root. He’s absolutely fabulous on and off the field. He speaks well, plays well, carries himself well. I have been a huge fan of his since we were doing all those practice sessions in India all those years ago. He was mightily impressive then and he is mightily impressive now. We don’t even need to mention Stokes because he’s so good. 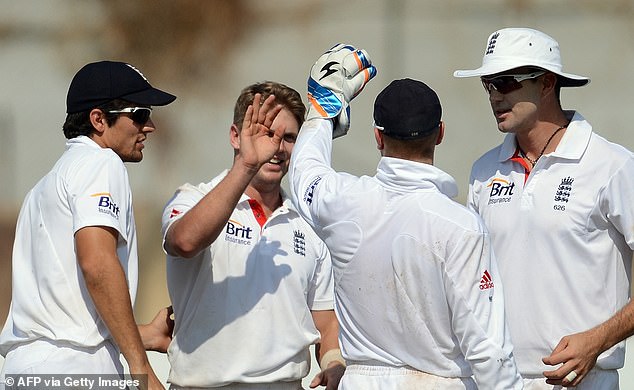 Pietersen also slammed England’s rotation policy, saying they do not have their best team

‘I like Crawley. He’s a very good player. I have seen some great things from Sibley. I played with Burns at Surrey and I have seen some fantastic things from him. I liked Lawrence in Sri Lanka, some of the footwork and some of the innings. The big issue is Broad and Anderson and can they replace them. They are still looking at how to do that. The way Jimmy’s bowling, it looks like he can bowl for the next five years. He keeps going and going and going.

‘But for the most part, they are young and inexperienced and this is the most fabulous opportunity for them to realise how tough it is to bat in conditions like this. Their psyche should be that they are positive in how they approach the next Test match and accept they didn’t play well and that they need to work on their technique. 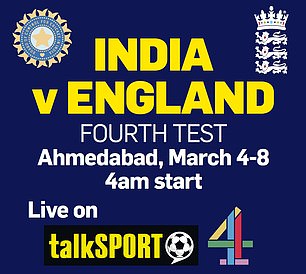 ‘It might not work in the next Test match but that’s absolutely fine. These are young players on their first tour of India and they will be back in four years’ time. It’s just about being positive in the way they go about the next Test match and forget this and let it be a learning curve. I’m not going to go finger-pointing and say “Drop this guy and that guy”.

‘Ball was definitely going to win the contest over bat as it generally does on most occasions on the Subcontinent. You have to find a way to counteract a spinning ball. Having played on wickets like that, you have just got to find a way.

‘When India come to England at the end of the summer, they are not going to prepare the flattest wickets for India to just bat for three days on. They will be green seaming wickets that will be prepared for home advantage.

‘I can understand people saying the wicket in Ahmedabad was atrocious and maybe it was under-prepared. But England batted first on it and England batted poorly. India have better spinners and England chose three fast bowlers to play on a turning wicket, so England need to look a bit closer to home before they start thinking about lodging huge complaints here, there and everywhere.’ 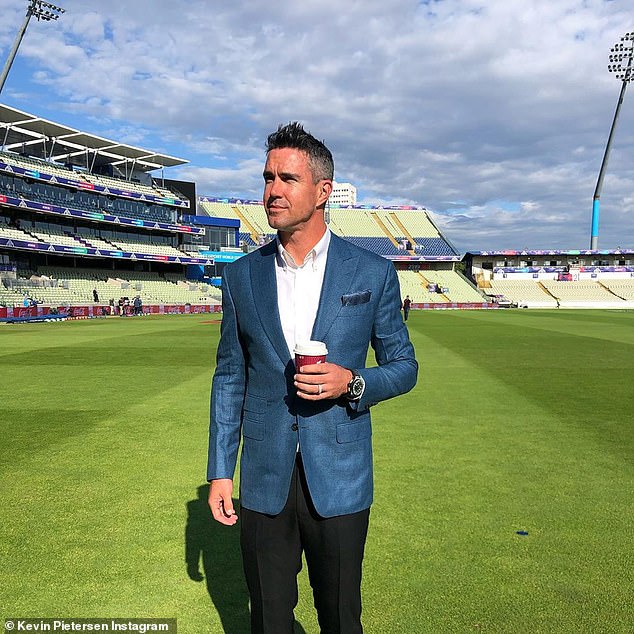 Pietersen was also scathing about England’s player rotation policy during the tours of Sri Lanka and India, which has seen several players return home early or be selected only for parts of each series. He said he was particularly perplexed by the decision not to have Moeen Ali available for the latter part of the series with India. ‘England have not taken their best team to India,’ he says. ‘I don’t think anyone apart from the people at the ECB agree with the rotation in a series of this magnitude.’

Others have maintained that the pressures of cricket in the era of Covid-19, when players are asked to spend even more time away from their families than usual and have spent weeks in quarantine or in bio-secure bubbles, coupled with the demands of white-ball cricket, make rotation a necessity.

‘Do you think Moeen Ali is going to miss out on his 700 grand in the IPL?’ said Pietersen. ‘All that stuff is what got me into trouble and got me sacked by the ECB. They used that to drive a wedge between me and the other players. They drove a wedge between me and the public. I was public enemy No1 because of everything that is happening now in English cricket. Anyone with half a brain will understand that and acknowledge that.

‘I am not for one second saying that Moeen Ali shouldn’t go and earn his £700k this year. He should. But he shouldn’t have been on that Sri Lanka tour and they should say to him that he doesn’t have to play in New Zealand.

Before he packs his bags for his flight, he ponders what changes he would make to the England side ahead of the Fourth Test and he laughs. ‘Well,’ he says, ‘I wouldn’t play three fast bowlers in India.’

talkSPORT is the exclusive radio broadcaster for England’s tour of India with every ball of every game live on talkSPORT 2. To follow the action, download the talkSPORT app for free.