Star all-rounder Ellyse Perry is in doubt for the white-ball series against New Zealand next month and one of the fastest bowlers in the world, Tayla Vlaeminck, faces an extended period on the sidelines after an injury setback.

Perry was named in an expanded 18-player squad on Friday but must beat the clock to recover from surgery on a hamstring injury which ruled her out of the T20 World Cup final in March. 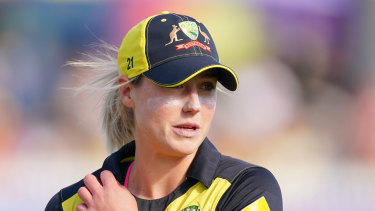 Ellyse Perry has been named in Australia’s squad but is in doubt for the games against New Zealand due to injury.Credit:AAP

ACT seamer Maitlan Brown is in line for her international debut while seamer Belinda Vakarewa and batter Tahlia McGrath were also named in a party which includes all of Australia's triumphant World Cup squad.

Skipper Meg Lanning said Perry was on target to play in the one-day international and T20 series but there remain question marks as to whether she will get enough match practice under her belt.

"She's doing everything she can to be fit and available for the series," Lanning said. "We're trying to give her as much time as possible."

The series, to start September 27, is scheduled to be played in Sydney and Queensland but CA says they could be moved due to the threat of COVID-19.

Vlaeminck will miss the WBBL as she recovers from a navicular stress fracture in her foot.

Now that next year's World Cup in New Zealand has been postponed, CA has taken what team physiotherapist Kate Beerworth described as the "long-term play" in managing the speedster, who was ruled out of the T20 world event on the eve of the tournament.

"She's been attacking her rehab with a lot of passion, trying to get back as quick as she can," Lanning said.

"She's very keen for her to get her body right and we don't rush anything because when she gets back we want her to play for a long period of time."