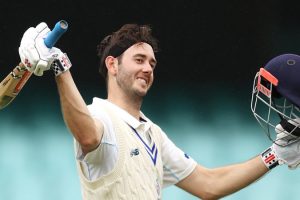 An entertaining Kurtis Patterson century wasn’t enough to force a result in the rain-interrupted NSW and Victoria Sheffield Shield match at the SCG on Tuesday.

Patterson reminded Australian selectors of his quality and showcased a different side of his game with a sparkling century in quick time as NSW pushed for a result – to no avail – after a washout on day one. 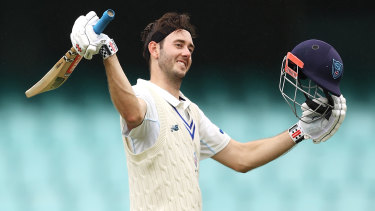 The one-Test batsman, who scored 114 not out against Sri Lanka in Canberra in 2019, peeled off 112 from 144 balls in the Blues’ second innings of 7-285 that ended with a sporting declaration.

The Blues’ decision looked to have set up an intriguing final few hours of play, with Victoria set 248 runs for victory from 53 overs.

But incessant rain and stubborn knocks from Peter Handscomb (39 from 73 balls) and Jonathan Merlo (7 from 82 balls) stifled hopes of a NSW victory.

Victoria were more than happy to play for the draw after slumping to 3-54 and stumps were pulled with the visitors on 4-91.

“I think we probably did as much as we could,” Patterson said. “You lose a whole day of cricket … it’s always going to be tough to get a result. I thought the style of cricket we played was a lot closer to our best than what it has been.”

After a tough grind in overcast conditions, Patterson freed the arms late in his innings by smashing four boundaries in five balls to bring up three figures – his ninth first-class century for NSW.

Later this week will mark 10 years since Patterson struck 157 on Sheffield Shield debut – becoming the youngest player in Australian first-class history to score a century in their maiden match.

Scores of 48, 4, 2, and 24 in two recent Sheffield Shield fixtures wasn’t enough to propel Patterson into Test calculations for at least the first two Ashes fixtures in Brisbane and Adelaide.

Like many other Test hopefuls not picked in the initial squad, Patterson won’t get another chance to stake his claim for selection in the third Test and beyond due to a lack of first-class opportunities with the Big Bash set to begin in early December. 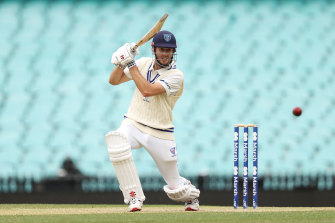 Patterson crunches one through the covers.Credit:Getty

“Having that clarity to try and set up a game allowed me to free up and play a few extra shots,” Patterson said. “There’s more frustration around probably the lack of runs out of these first three games. I feel like I’ve been hitting the ball pretty nicely to be honest. It’s more frustrating when you actually are doing that and not getting the runs as opposed to nicking and nudging and not getting them.”

Victorian quick James Pattinson was the best of the bowlers with 5-71 from 18 overs. He said he had “no second thoughts” about coming out of Test retirement for a tilt at the Ashes.

The teams will meet again on Wednesday in a one-day fixture at the SCG, with World Cup squad members Adam Zampa and Daniel Sams set to feature.

Meanwhile, Usman Khawaja’s bid for a Test recall was halted by an unsafe pitch in Adelaide that forced Queensland and South Australian players from the field.

Queensland and Australian first drop Marnus Labuschagne was at the crease when a number of deliveries rose sharply off the pitch that caused him discomfort.

After a long discussion between officials and players, it was agreed the pitch, which contained a number of wet patches, wasn’t suitable for play.

South Australia will resume on day two at 1-87.

The match has been billed as a showdown between Khawaja and Travis Head for the No.5 spot in the Australian order for the first Ashes Test at the Gabba on December 8.