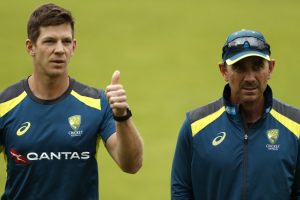 Australian Test captain Tim Paine has strongly supported Justin Langer, declaring the embattled coach will be in charge for the Twenty20 World Cup and the Ashes. 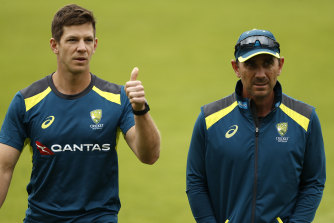 Tim Paine and Justin Langer during the 2019 Ashes in England.Credit:Getty

“We’ve had some really robust conversations amongst our leaders in the last few days and we’re really looking forward to the next six months with JL,” Paine told his SEN radio show in Hobart on Friday.

“It was important that myself, Aaron Finch, Pat Cummins and the leaders of Australian cricket got around him, discussed things that needed to be discussed, and then got around him and supported him and looked to move forward.

“There’s no doubt the week has been difficult for him, but as I said the last few days, we’ve been able to galvanise around him and have some really robust discussions on where we want to take this cricket team, what we expect of him and what he expects of us.”

“The stuff that was reported wasn’t anything new, this is stuff that’s been dragged up from an Ashes series two or three years ago.”

Paine’s comments reflect a statement by Hockley before Wednesday’s emergency meeting, backing Langer to see out his contract, which ends midway through next year.

Neither Paine nor Hockley made any mention of Langer’s position beyond his current contract.

There are concerns among some players and support staff that if Langer does see out his contract, and Australia comfortably beat England as expected given their flimsy batting line-up, he will be reappointed for another term.

Australia are due to leave for the T20 World Cup in the UAE early in October while the Ashes begin in early December at Brisbane’s Gabba following a one-off Test against Afghanistan in Hobart.

The latest flare-up over Langer’s coaching came after a brief confrontation with a Cricket Australia-employed journalist during the recent tour of Bangladesh. Cricket.com.au, a news-based website run by CA, ran a video of the home team celebrating a series victory after going 3-0 up.

It prompted the current wave of revelations around the high stress levels in the Australian camp and Langer’s mood swings.

“The stuff that was reported if we’re totally honest wasn’t anything new, this is stuff that’s been dragged up from an Ashes series two or three years ago,” Paine said.

“It’s just been a bit of a shame I think in the last week that a lot of the failings around Australian cricket have been pinned on JL. That’s certainly not the case,” said Paine.

“We haven’t lived up to our own standards on the field, we haven’t won enough games of cricket and that’s pretty much put us all under pressure.”

“But that’s the world we live in, we’re playing professional sport, you’re judged really harshly when you don’t win, we’ve clearly had a bit of a rough trot with white-ball cricket. The red-ball team hasn’t been playing.”