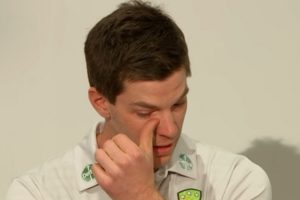 Cricket Australia bosses have declared they won’t stand in Tim Paine’s way for Ashes selection but wet weather delivered another setback for the former Australian captain on Saturday.

A day after Paine resigned from the top role in tears in the wake of the exposure of his lewd text messages with a former Tasmania Cricket staffer, he had hoped to take the field in a club match in Hobart. It was to be his first hit in seven months, having had invasive neck surgery for a bulging disc, but rain at Queenborough Oval thwarted it. 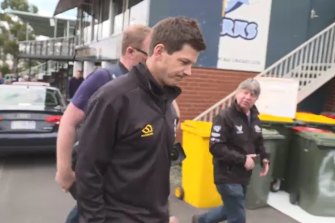 He will still hope to find form in a four-day Tasmania second-XI match next week and in an Australia A clash also featuring the Test players in Brisbane from December 1 but whether he is picked for the Ashes opener at the Gabba on December 8 is an issue for the national selectors – and remains a point of intrigue.

However, on Saturday he at least had the support of CA chairman Richard Freudenstein to remain in the selection mix, amid claims it was hypocritical for Paine to stand down as captain yet remain in the squad.

“Tim is not continuing as captain. He is available to continue as a player. We feel his resignation was appropriate,” Freudenstein said.

“The communications [lewd text messages] in 2017 were, obviously, private. I think any investigation takes into account all the circumstances at the time. But we are comfortable that Tim is available to be selected as a player.”

The selectors will have to take several factors into play when deciding if Paine, 36, should remain in the squad. They will need to be confident he can handle the intense focus that will come his way from the public and, most likely, England’s players, who will almost certainly use this scandal to try and destabilise Paine and the team. 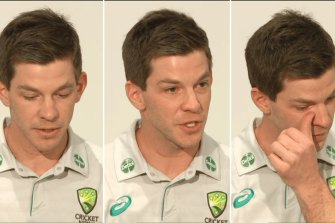 Tim Paine during his media conference on Friday.Credit:Nine

Selection chairman George Bailey finds himself in a difficult position, for he and Paine were former teammates and are great friends and business partners. Bailey was briefly at Queenborough Oval on Saturday.

Coach-selector Justin Langer may feel he owes Paine for the hard work the pair has put in restoring the team and its on-field values since the dark days of the ball-tampering scandal. Tony Dodemaide, the former Australian seamer, is new to the panel.

If the selectors consider change, the experienced Alex Carey – chosen in the Australia A squad – would be firmly in contention.

That Paine has not played a first-class match since April is a concern. He made the odd error with the gloves last summer, admitting his concentration had been an issue in the tense Sydney Test against India, but he has a healthy career average with the bat of 32.63 in 35 Tests. This includes an average of 40.8 last summer.

As the selectors ponder what to do, former Test batsman Ed Cowan said he was surprised that Paine had not retired on Friday and questioned whether he should remain in the team.

Cowan said Paine’s lack of cricket – the Australians have not played a Test since losing to India in January – and his injury issues meant his spot was under the spotlight.

“Absolutely … there is no denying, 37 years old, neck surgery, hasn’t even played a game until today [Saturday] when he is turning out for the University of Tasmania in a club cricket game, no Shield cricket in the lead-up, this was going to be a tough ask from a cricket point of view for anyone, let alone the captain,” Cowan said on ABC Radio.

“My gut feel was, if he wasn’t the captain, would he have been picked in the first Test knowing the little amount of cricket or the form he has put on the board because of it? Without being the captain, I am actually surprised he didn’t retire yesterday because he is now under the pump and it’s the double-whammy effect – no cricket, under pressure. What really is there to gain from a cricket point of view? I am surprised he is still playing, to be honest.”

Cowan said he was “sad” for all parties and the handling of the matter had been a “great reminder” that full transparency was needed. He said the decision to not disclose the investigation represented a “toxic” culture of CA at the time.

“I would like to say from the outset, if he is available, he is the best wicketkeeper in Australia,” Berry said on SEN Radio.