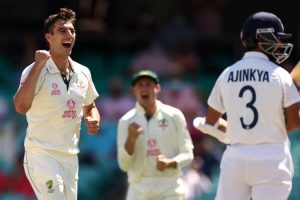 India are wounded and wavering at the SCG after Pat Cummins led a sensational Australian performance with the ball and in the field to put the hosts in the driver's seat in their bid to clinch an absorbing third Test and get one hand on the Border-Gavaskar Trophy.

Australia will resume on Sunday leading by 197 runs with two days to play in Sydney, with Steve Smith (29 not out) and Marnus Labuschagne (47 not out) once again holding court. 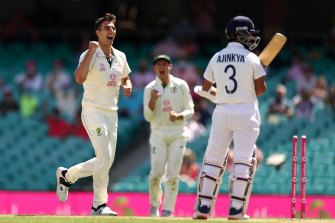 Pat Cummins celebrates after taking the wicket of Ajinkya Rahane.Credit:Getty

But they could largely thank Cummins and Josh Hazlewood for their dominant position on Saturday as India's chief tormenters from the first Test in Adelaide made Australia's first innings total of 338 look bigger than it first seemed.

Cummins claimed a stunning 4-29 in 21.4 overs and Hazlewood took 2-43 and turned the momentum with a brilliant run out as the tourists were rolled for 244 before a crowd of 10,075.

Not just content with breaking the opposition's spirit, the Australian quicks also had India's Rishabh Pant and Ravindra Jadeja being dispatched for scans on Saturday afternoon.

Cummins, who had already ended the series of Mohammed Shami when a delivery from the Australian fractured his arm in Adelaide, struck Pant on the elbow and Mitchell Starc had Jadeja clutching his thumb.

Both batsmen bit their lips and continued on in pain but, in a major setback for India's hopes in Sydney and beyond, they were both sent for further medical examination as Australia began their second innings.

While back-up gloveman Wriddhiman Saha stood in for Pant behind the stumps, the absence of Jadeja may be felt dearly by the visitors.

The spinner was their star in Australia's first innings, making key breakthroughs with the ball and eventually running out centurion Smith with a staggering direct hit.

"We are definitely missing him in the second innings but I hope he recovers for the next one," India captain Ajinkya Rahane said.

Australia's openers lasted less than 10 overs in their second dig, with Will Pucovski caught behind off Mohammed Siraj for 10 and David Warner lbw to Ravi Ashwin for 13.

But with Smith and Labuschagne looking untroubled for the rest of the afternoon, the hosts are right on top and heavy favourites to take a 2-1 series lead into the final Test in Brisbane next week.

Such a significant advantage hadn't seemed on the horizon earlier when Tim Paine and Australia were frustrated by Decision Review System outcomes and half chances that didn't go their way.

India's wall of two summers ago, Cheteshwar Pujara, also looked intent on another lengthy occupation, gradually compiling a 174-ball 50 that was slow even by his standards.

But Hazlewood provided the circuit breaker with a breathtaking throwing down of the stumps from mid-off, flinging the ball at the non-striker's end while still on his knees to catch Hanuma Vihari short of his ground.

"Jonty Rhodes, how good is he?" Cummins said, citing the former South Africa fielding maestro. "Unbelievable. The big fella getting it done after all those overs. I'm sure he'll have that replay up tonight."

Australia's fielding woes did them no favours in their second Test defeat in Melbourne but they were in a different league here.

Labuschagne also produced an incredible direct hit, while a third run out complemented the top-class bowling of Cummins and company.

For all the time he was out there, Pujara in the end only managed 50, India's equal top score of the innings. Pant, with 36, and Jadeja (28 not out) were the others to provide resistance, despite wearing injuries for their troubles.

"I thought both Josh and Marnus' direct-hit run outs, especially getting rid of a guy like Vihari, came out of nowhere," Cummins said. "The fielding at the MCG was spoken about a lot. And in between Tests, we did a lot of work on it.

"Not only the run outs, I thought the attitude was fantastic. You had everyone diving around in the outfield. It was a really good team effort today."

While India are a bowler down without Jadeja, the match shapes as Nathan Lyon's to wrap up as he bids to draw closer to 400 Test wickets.

"The big thing is to keep that lead, get it up over 300-odd and hopefully the wicket keeps deteriorating and make that a really tough total to chase," Cummins said.