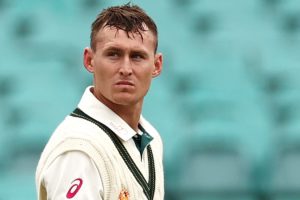 The pair ripped into Australia's No.3 for his eccentric mannerisms at the crease, apparently unaware the cameras were recording. 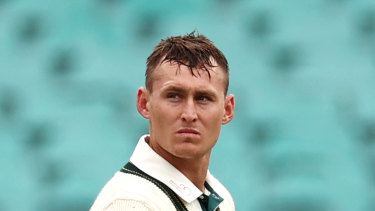 Test batsman Marnus Labuschagne was mocked for his eccentric mannerisms by Shane Warne and Andrew Symonds.Credit:Getty

Warne, then a player, had the finger pointed at him but has maintained he was not the culprit. A Nine cameraman, Joe Previtera (aka Joe the Cameraman), publicly confessed to the jibe but mystery has always hovered over what happened.

The conversation on Friday started innocently enough with Warne suggesting Labuschagne's part-time leg-spin should be introduced into the attack late on the second day of the third Test in Sydney.

"Do something now to his ADD (attention deficit disorder) f***ing pills," Symonds said.

Symonds then suggests "we'll have to give him the hog pile" – a term which refers to a group of people jumping on top of a person.

"Mate, if you keep that shit up we're going to have to squash your guts out your arse," Symonds says, drawing a laugh from Warne.

Australia's team management is aware of the remarks but a team spokesman has indicated it is unlikely they will take the matter further during the crucial Test.

The comments will make for an awkward situation should Warne have to interview Labuschagne as part of his commitments with Fox Cricket.

Warne has worked with Labuschagne in the past, providing the part-time leg-spinner with bowling tips during the 2019 Ashes in England.

Kayo Sports, a subsidiary of Foxtel, issued an apology on Twitter.

"Our stream started early and caught some unacceptable comments. On behalf of @kayosports and the commentary team, we unreservedly apologise," the streaming service tweeted.