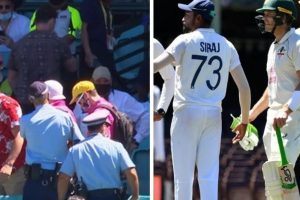 The New Year’s Test match between Australia and India was interrupted by an incident involving six spectators at the SCG on Sunday afternoon.

In the 87th over of Australia’s second innings, Indian bowler Mohammed Siraj stopped play to call attention to an incident in the crowd.

After talking to Siraj and Indian captain Ajinkya Rahane, the umpires and a cluster of security guards quickly migrated towards the fine leg boundary.

Players waited in the field for approximately 10 minutes as police questioned a handful of spectators in the SCG’s Brewongle Stand.

Australian captain Tim Paine at one stage looked fully prepared to march towards the fence and assist in the search for the culprits.

Eventually, four attendees were asked to leave the venue before play resumed, and two other men followed them soon after.

A Cricket Australia spokesperson confirmed the patrons had been removed from the stadium, and NSW Police was investigating the matter.

Former Australian wicketkeeper Adam Gilchrist said on Fox Cricket: “If anyone has been throwing frightfully horrible comments around as has been alleged, I think they will be able to track down who it is — and not just the ICC, hopefully it’s the police that find out who it is.”

Australian great Michael Hussey added: “If there’s been abuse directed towards the players, just kick them out straight away. Not welcome ever.”

On Saturday evening, India reportedly lodged a complaint to the ICC after two players allegedly faced racial abuse from the SCG crowd on day three.

Indian officials spoke with the ICC match officials and the stadium security after play to make the accusations.

The match stopped for 10 minutes as authorities intervened.Source:AFP

Sunday’s incident sparked a flood of reaction on social media, with cricket icons and supporters voicing their disgust at the allegations.

Indian legend VVS Laxman tweeted: “Very unfortunate to see what’s happening at SCG. There is no place for this rubbish. Never understood the need to yell abuse at players on a sporting field. If you’re not here to watch the game and can’t be respectful, then pls don’t come and spoil the atmosphere.”

Cricket journalist Geoff Lemon called it a “national shame” and NSW fast bowler bowler Trent Copeland tweeted: “There’s seriously no place for this rubbish. Never understand the need to yell abuse at players on a sporting field, let alone anything like this to India. If you’re not here to watch the cricket, and can’t be respectful, get OUT.”

Cricket journalist Melinda Farrell said instances of abuse from the stands were “beyond disgusting”.

This is ugly. The people in the crowd who are being derogatory toward Indian players deserve to be ejected and not allowed back #AUSvIND https://t.co/VI7nMSstKC

Cricket Australia released a statement on Sunday afternoon, reaffirming its zero-tolerance policy towards discriminatory behaviour in all forms.

“CA is awaiting the outcome of the International Cricket Council’s investigation into the matter reported at the SCG on Saturday. Once those responsible are identified, CA will take the strongest measures possible under our Anti-Harassment Code, including lengthy bans, further sanctions and referral to NSW Police.

“As series hosts, we unreservedly apologise to our friends in the Indian cricket team and assure them we will prosecute the matter to its fullest extent.”

“At the SCG, we pride ourselves on welcoming anyone and everyone in a safe and inclusive environment,” Mather said.

“We are taking this extremely seriously. If those involved are identified, they will be banned from the SCG and all Venues NSW properties under our Act.”

Australia declared on 6/312 in the second innings, setting India a target of 407 runs for victory in the third Test.