Mooney and Redmayne in record-breaking partnership 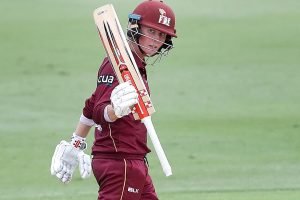 Star batter Beth Mooney posted her highest one-day score as the Queensland Fire set a bag of records in their 160-run WNCL win over Western Australia at Allan Border Field on Monday.

The Fire’s total was their best in WNCL history, while Mooney’s 163 from 139 balls was not only her highest “List A” score but also the best WNCL innings by a Queenslander, and the sixth best individual score in the competition’s history.

Georgia Redmayne also scored a ton, with her 121 off 107 balls her highest score.

Together, Mooney and Redmayne put on 259 in just 24 overs for the second wicket, a record partnership for Queensland.

“It was nice to hit a few out of the middle today,” Australian star Mooney said.

“It’s nice to be out there in a big partnership.

“First and foremost my job is to get the team into a winning position, and if that means battling through a bit of the heat and being there at the end, that’s totally fine.

“The bowlers have been setting the games up for us for the last few years, so it was nice the batters could set the game up for the bowlers for once.

“That’s our job as batters, to make sure the game’s always moving forward and we were fortunate enough to do that.”

Redmayne said it was “nice to be up the other end” with Mooney in such fine form.

“It was really nice that we were able to get that big partnership,” Redmayne said.

“I didn’t realise it was the record partnership as well – that’s really cool.”

The Fire return to action on Friday against ladder leaders Victoria at Junction Oval.