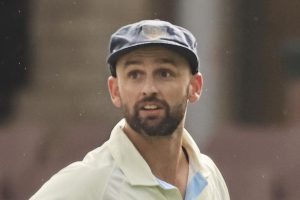 England’s batsmen were bowled out for 112 and 81 on a turning deck at Narendra Modi Stadium last week, with several pundits blaming the pitch for their disastrous performance.

Former England captain Michael Vaughan called the Ahmedabad deck “awful”, claiming the outcome made him “worry for the future of Test match cricket”.

England skipper Joe Root, who took five wickets with his part-time off spin, said he felt for the Ahmedabad fans.

“They have come to watch Virat Kohli face Jimmy Anderson and Stuart Broad or Jack Leach, and watch Ashwin against our top batters like Ben Stokes,” Root said after the match.

Root said his own bowling performance “sums up the wicket”, while former Australian international Mark Waugh called the pitch “unacceptable”.

But Lyon couldn’t resist pointing out the double-standard — England has rolled opponents for considerably lower scores in conditions that favoured seam bowlers.

“We play on seaming wickets around the world and get bowled out for 47, 60,” Lyon told AAP. “Nobody ever says a thing.

“But as soon as it starts spinning, everyone in the world seems to start crying about it.

“I was up all night watching it.

“It was absolutely brilliant. I’m thinking about bringing that curator out to the SCG.”

“What makes a good surface? Who defines this? Seam on the first day, then bat well, then spin on the last two days? Come on, who makes all these rules?” Ashwin said after the 10-wicket victory.

Spin bowlers claimed 28 of the 30 wickets that fell in the third Test, leaving England’s selectors ruing their decision to name four pacemen in the starting XI.

“The best thing about this Test match that just passed is that England went in with four seamers,” Lyon said.

Indian captain Kohli also defended the wicket, saying both sides were let down by their batting, and opener Rohit Sharma insisted there were “no demons” in the pitch.

England great Geoffrey Boycott agreed that his country could not blame the pitch for their humiliating defeat.

“There is nothing in the rules that says what type of pitch should be prepared,” Boycott wrote on Twitter.

“We had first choice of the surface and they were better than us. Simple.”

The fourth Test between India and England begins on Thursday at the same venue.