Litchfield holds nerve as Thunder down Strikers in tense finish

Schoolgirl Phoebe Litchfield scored full marks in a test of nerve to sink the Adelaide Strikers and leave the Sydney Thunder with one foot in the WBBL finals.

The teenager made headlines last year when a video of her batting in the nets went viral – but if she continues to play like she did on Saturday, she is destined for more than 15 seconds of fame. 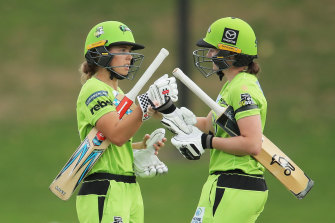 Chasing 134 to stay in control of their finals fate, the Thunder needed six to win from the final over after Haynes was stumped trying to launch Amanda-Jade Wellington's leg-spin into Five Dock Bay.

Unable to beat the field at her first attempt for victory, she secured the winning runs at her second try, finding the boundary with a tuck off her hips behind square.

The Strikers will be ruing the chances they gave to Haynes, whose 30 off 23 balls arrested the Thunder's middle-order wobbles.

The national vice-captain was reprieved on zero by Tegan McPharlin, who missed a stumping off Wellington, then was dropped on four by Alex Price at cover.

The boundaries came thick and fast early for Thunder openers Tammy Beaumont and Rachel Trenaman, but they needed to as they otherwise struggled to turn the strike over.

Punished early, the world's No.2-ranked T20 bowler Megan Schutt kept the Strikers in the game, conceding just two runs from the 17th over – and her last – but was wicketless in a strategic win for the Thunder.

It came as little surprise that Taylor was run out after being hampered by a hamstring injury throughout her innings.

Sammy-Jo Johnson had a day out with the ball and in the field, her sharp throw making Taylor pay for a horrible mix-up while her three wickets prevented the Strikers from getting on top of the bowling.