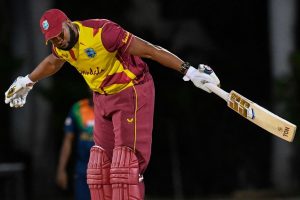 Windies T20 skipper Kieron Pollard became just the third man to hit six sixes in an over in an international after taking a Sri Lankan hat-trick hero apart.

It was non-stop entertainment at the Coolidge Ground in Antigua where the Windies overcame Sri Lanka by four wickets with almost seven overs to spare.

Spinner Akila Dananjaya must have thought he'd put the visitors on course to defend their total of 131-9 when he dismissed Evin Lewis, Chris Gayle and Nicholas Pooran in successive balls.

But with the Windies reduced to 62-4, Pollard got his eye in with a straight slog sweep over long on to flex his muscles.

The next went straight back over Dananjaya's head and the third moved even further round the dial over a wide long off.

Just like Yuvraj Singh and Herschelle Gibbs before him, there was no stopping the big Trinidadian all rounder and the fourth ball was slog swept again over cow corner.

The fifth shot was brute force as he took a ball outside off and swatted it over long on before the sixth was an easy looking flick off his pads over deep square leg before he took a bow.

“I felt after hitting a couple of sixes, I understood how the pitch plays, it was important to be positive and play your shots,” said Pollard. “Back yourselves to clear the boundary.

“A couple of things went through my mind before the sixth ball, I thought: should I go for the six or take the 30 runs in the over? He went around the wicket and bowled it on to my pads, I told myself: ‘Wait Polly, take a chance.’ That’s how I have played my cricket all along, especially against the spinners.”