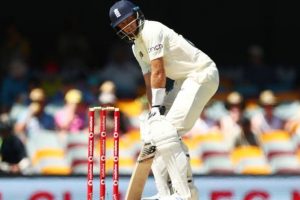 Plan Bs are all the rage and England badly need one for Adelaide after the gloom of Brisbane. The thought that a combination of a pink ball, day/night cricket and actually picking a first-choice side this week will magically resuscitate England’s Ashes challenge is optimistic. Australia’s record in day/night Tests is played eight, won eight – and five of those were staged in Adelaide.

It is true that England will have a better bowling hand with Jimmy Anderson and Stuart Broad on board for this week’s Second Test – why neither was chosen for the Gabba was an act of reckless self-harm. But if Anderson and Broad represent an enhanced threat to Australia’s batsmen, Australia’s attack – even without the injured Josh Hazlewood – will be licking its collective lips at going at England again.

The First Test was lost when England’s batting line-up subsided on day one. Scores of 147 first up do not tend to win many Test matches.

England have top-order batting issues they are not are not going to solve at the drop of a cork hat in Australia so they need to think outside the box.

Joe Root is England’s best batter. He is so far ahead as to be in a different league.

He needs wrapping in cotton wool yet in Brisbane he was at the crease after 20 balls of the match. It was his own fault in a sense for making the wrong call after winning the toss – Australia would have batted too, mind – but it did him and England no good whatsoever for the captain to be exposed with the ball hard and shiny.

The nick which followed, to a good ball from Hazlewood, removed him for a duck and – given he averages 50 in Test cricket – left a gaping hole in England’s scorecard.

For Adelaide England should ponder the option of dropping him down to No 5.

It would be an unconventional strategy. Throughout cricket history the best batsmen – as they were called then – have almost always occupied the top slots in the batting order.

Root should do too ordinarily and No 5 would not be a long-term position but as a sticking plaster for the problem England have in Australia it is worth considering.

It is counter-intuitive after a 2021 in which he has scored more runs in a calendar year than any other Englishman at No 4 – and in that period hurrying to strap his pads on has not been an unfamiliar sensation – but this is a very specific case.

Pat Cummins takes his wickets at 16 runs apiece in day/night Tests and Mitchell Starc 19. The leeway that may have been there against other opponents in other conditions for Root will simply not exist at Adelaide.

Time has to be bought by England for their captain until the pink Kookaburra ball softens.

The relative ease with which Jos Buttler and Ollie Pope played Australia’s bowlers in the afternoon session on day one showed the difference. Not that it amounted to much given they both departed in the 30s but if it had been Root putting down roots, the shape of the game could have been different.

If Root does drop to No 5 who goes in above him?

England could bring in another specialist batter – Zak Crawley say. But that would mean leaving out a bowler.

After Jack Leach’s savaging in the First Test he would be the obvious candidate – England need four seam bowlers to share the workload – but it is rare for any side to operate without a specialist spinner in Australia.

Pope could be moved up the order or Ben Stokes – both are technically capable of going in higher up the order – but that would carry with it a sense of shuffling the deckchairs on the Titanic.

So how about something totally from left field – a tailender promoted specifically to shield Root?  A daytime nightwatchman if you like.

Ollie Robinson was in the middle for 40 balls yesterday coming in at No 9. He faced 17 of them.

In the context of a doomed cause, his knock was an irrelevance but transplanted it into a sheltering scenario for his captain and those seven overs could have helped. Certainly, nothing would have been lost by trying it.

England saw the benefit of buying time for Root second time around in Brisbane when he made 89 having come in after 20 overs.

This Ashes tour was always going to be an uphill struggle with no Jofra Archer to lead the England attack and the tourists did themselves few favours with their bowling selection for the First Test.  But without runs on the board England have nothing in this series.

Root has still to score a Test hundred in Australia. England have to do everything in their power to help their captain change that. Even if that means turning convention on its head.