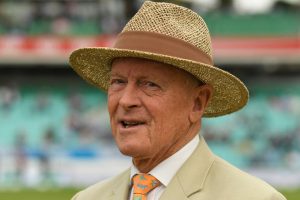 Boycott, renowned for his outspoken ways, was characteristically brutal after Joe Root's side threw away a seemingly winning position on day five.

With India 209 for 8 in the morning session and just 182 ahead, tail enders Jasprit Bumrah and Mohammed Shami put on 89 in an unbroken ninth wicket stand and following Virat Kohli's declaration, the hosts were dismissed for just 120.

And neither the captain or his teammates were spared in Boycott's analysis – despite Root's sparkling knock of 180 not out in England's first innings.

"This Test match has proved two things," he said.

"Firstly, if you are stupid you do not deserve to win Test matches. As much as we love Joe Root for his magnificent batting, he cocked up with his tactics.

"Secondly, England cannot keep relying on Joe for all their runs. There has to be an improvement from the top three very soon because it is getting beyond a joke."

Indeed, England's bowlers appeared intent on peppering Bumrah with short balls, after the Indian seamer had done similar to James Anderson at the end of England's first innings.

It backfired spectacularly as Bumrah notched a Test match best score of 34 not out, with Shami unbeaten on 56 along side him, and to rub it in the former went on to take 3 for 33 as England capitulated in the final two sessions.

"Joe had been doing well in his field placings and captaincy but seeing Jasprit Bumrah at the crease was like a red rag to a bull," added Boycott, 80.

"He encouraged Mark Wood to just pepper him with short balls. It is obvious the England captain and some of his players wanted payback for the working over Bumrah gave James Anderson in the first innings.

"Heated words were exchanged and they seemed more intent on hitting Bumrah and Mohammad Shami instead of getting them out."

Boycott's issues with England's batting also came as no surprise, as Root aside, only Jonny Bairstow notched a half century over the two innings while the under fire Dom Sibley and returning Haseeb Hameed notched scores of 11 and 0, and 0 and 9, respectively. Sibley's opening partner Rory Burns also fell for a second innings duck.

The result means India take a 1-0 lead in the five match series, with the third test getting underway next Wednesday, August 25 at Headingly.