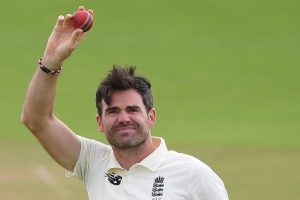 Jimmy Anderson was reportedly snubbed for a knighthood in the New Year Honours over fears he would be sledged by the Australians during next winter's Ashes.

England's record wicket-taker – the first fast bowler in history to pass 600 Test scalps – is expected to receive the gong in the future.

But, according to The Times, it was thought it would be unwise to honour the 38-year-old while he is still an active part of the England setup with an Ashes tour on the horizon.

“I don’t think we’d send out Jimmy Anderson to face the Australians with a knighthood," a source told the paper.

Anderson's big pal Alastair Cook, England's record run-scorer, was awarded a knighthood in 2019 – but only after he had called time on his international career. Swing king Anderson will be 39 by the time England head Down Under, but he has stated his desire to be part of the squad.

If he is included, he would become the oldest England fast bowler to play a Test in Australia for more than a century.

England stars were awarded a raft of MBEs and OBEs following their victorious 2005 series against their oldest adversaries – their first Ashes success since the 1986-87 tour of Australia.

The gongs were met with derision Down Under, with Paul Collingwood – who was given an MBE despite playing only the fifth Test and scoring just 17 runs – a particular target.