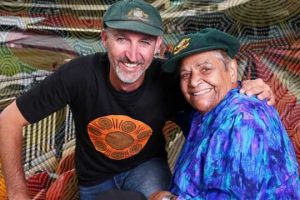 This November is the 25th anniversary of the greatest Indigenous cricket celebration that never was.

Plenty were talking about outstanding fast bowler Gillespie when he proudly walked on to the SCG to play West Indies, but his Indigenous heritage was not spotlighted because it went undetected by the media, Cricket Australia … everyone.

Gillespie was keeping no secrets.

As shy as he was at that stage of his career, he would have willingly explained how his family heritage is connected to the Kamilaroi people of northern and central NSW had anyone asked. But they didn’t.

“I always found it weird that it took so long to come out because I always knew I was of Indigenous descent and all my mates knew it,’’ Gillespie said.

“I was never asked (initially). It was a strange one. Then when it did come out I could not believe how much publicity it got.

“I naively assumed there was a lot of people in Australia with Indigenous blood. Then when you research it you realise we are quite unique.

“I was incredibly proud. My brother is still working with the Aboriginal Legal Rights Movement in South Australia and dad was CEO for about a decade.’’

Of the 458 male cricketers to play Test cricket for Australia, only Gillespie has Indigenous heritage.

Australian cricket is well acquainted with this deeply embarrassing statistic, owns it and yearns for the day when it changes. As does Gillespie.

“We have seen female Indigenous representation in Tests with Ash Gardner in recent times and in men’s format in the shorter formers of the game with Dan Christian and D’Arcy Short and Scott Boland, but it would be fantastic to see more.’’

Australia’s embodiment of Indigenous cricket has thankfully improved since the day Gillespie made his Test debut.

Increasing Indigenous participation is a major goal for Cricket Australia and the numbers have risen from 8500 in 2013 to 69,092 to July 2019, an impressive rise, but it comes off a low base and CA admits it is still “under represented’’ by Indigenous players.

Ash Gardner is proud of her heritage.Source:Supplied

CA has a National Indigenous Cricket Strategy, which covers areas from high performance to grassroots participation, and has specialised staff dedicated to the growth of cricket for Aboriginal and Torres Strait Islander peoples, and formal partnerships with Clontarf and Stars Foundations that include the provision of equipment and resource for their education programs.

As heartening as it was to see Australia’s cricketers form a barefoot circle to support the Black Lives Matter crusade and Australia’s Indigenous heritage at the SCG, nothing would enhance the cause and the culture more by seeing more Indigenous players at the game’s top level.

In the same way that Shane Warne inspired thousands of young bowlers to take up leg spin, Mel Jones, co-chair of Australia’s First Nations advisory committee, said the key breakthrough for Indigenous cricket would be having a role model on television.

”When you look at areas you want to improve on, visibility is key,’’ Jones said.

“For us to have Ash Gardner and Hannah Darlington playing and coaching in the women’s game, and D’Arcy Short in the men’s game, is so critical.

“Indigenous kids and parents can see cricket is a game for them and not just white people. We also appreciate working with people like the Clontarf Foundation because we can say “This is what we want to do but you can tell us if we are on the right track.

“The big thing for us is we want Aboriginal and Torres Strait Islander coaches and administrators right throughout the system.’’

Gillespie senses the times are changing, as they must.

“The intent is there. Time will tell. There are good intentions to give Indigenous cricketers as good an opportunity as can possible. My son, Jackson, last summer played an under-age Indigenous game in Adelaide and really enjoyed it. He’s 15 and wants to be a fast bowler. He has the body for it. He is 6’3’’ and he likes bowling fast, so that’s good fun.

“One thing the football codes have done really well is help with participation and get out and drive their cause. Footy is an easy one. You get a footy and some open space and just go.

“In cricket there is a bit more to be organised, I suppose. I think a lot of that has got to do with the good work the footy codes have done to engage with Indigenous people and get the game at the forefront of their minds.

“We know AFL is a very popular sport for Indigenous players, as is rugby league. I sense these sports have been good in getting out to the communities and in schools.’’