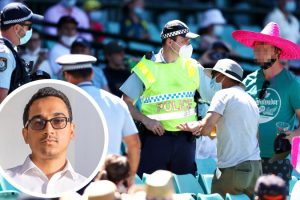 An Indian-Australian spectator who was among six people escorted from their seats by police at the SCG on Sunday has defended the men accused of abusing India fast bowler Mohammed Siraj, saying he did not hear the group using racial taunts.

Sydney resident Prateik Kelkar attended the fourth day of the Test on Sunday and says he was ejected after trying to explain to police and security that Siraj was not racially abused by a group of men behind him, who are the subject of a police investigation. 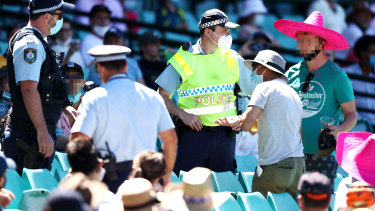 Prateik Kelkar (grey shirt) remonstrates with police after spectators were ejected from the SCG. Credit:Getty

Kelkar explained that he and a friend were asked what happened, but weren’t allowed back in to watch the cricket.

“We were with the cops. They have a holding area in the stadium,” Kelkar said. “They took our statements and ID. We were in separate interview rooms. A person from Cricket Australia spoke to us and said: 'we can’t let you back there'. They didn’t want us talking to the media, so they escorted us out a back exit. They didn’t want us to go out through the front exit.

“Nothing happened to anybody, except getting kicked out. They just said, 'Look, we’re hearing two sides of the story. No one is under arrest or anything of the sort, we just can’t have you come back today'. 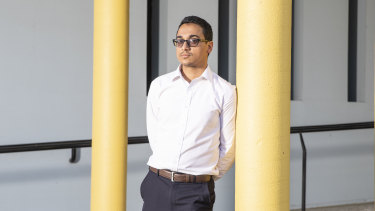 “Basically they said if we had tickets for Monday we wouldn’t be able to come back. When they have finished their investigation they’re going to call us up and let us know.”

While Kelkar agreed something racist in nature could have been said elsewhere in the ground or during Saturday's play, he defended the group of men who were marched out on Sunday.

“What I wanted was that both sides of that story be heard,” Kelkar said. “It’s not fair they are getting vilified in the media when I can tell you they have done nothing wrong.

“I am Indian. I have been racially abused before in Australia and I can tell you that it wasn’t [racial abuse]. As you can tell from my accent, if there was something racist going on, I would have heard it and done something about it.

“Maybe he heard it somewhere else, sure, but it just wasn’t from the guys behind us. The problem is he can’t prove what he heard, we can’t prove that he didn't hear it. It’s a shit situation, especially for the guys who got kicked out.”

India have said comments from sections of the crowd were of a racial nature and abuse of players had "been a continual thing at Sydney".

Footage has circulated on social media capturing spectators chanting Siraj's name on Saturday from behind where he was stationed in the field. There were suggestions online that the words "brown dog" could be heard in the clip – an insult Indian sports journalist Boria Majumdar reported was directed towards the fast bowler at the SCG – but the audio is not clear.

Kiran Aithala was seated close behind where Siraj was positioned in the field for much of Saturday's play and said that, while spectators around him directed foul language towards Siraj, he did not hear any racist abuse.

"The group of drunk guys behind was heckling Siraj using foul language … lots of f-words and c-words," Aithala said. "I myself didn't hear any racial abuse but there was plenty of abusive language used.

"There was a lady with her two young sons in the same row as me to my right and she seemed uncomfortable with the language used as well."

Ranga Kandadai said he was also sitting in the area behind Siraj and "the heckling was consistent and on every ball during which Siraj was anywhere near us".

"The guys behind me were vocal when the Aussies were on the field too but the words were largely amusing and positive," he said. "But when it came to Siraj, the chanting was uglier and had swear words at times. I did not pick up racial abuse from the lot behind me, but offensive language, certainly."

After the Herald reported witnesses saying fans had called Siraj by the name "shiraz" on Sunday, debate on social media questioned whether it amounted to racism.

"Ridiculing someone’s name can involve racism, where a name is a marker of ethnicity or difference," Dr Soutphommasane said.

"I’m not surprised that we’re spending days arguing about whether an incident was racist.

"Too often we lapse into denying that racism exists (in Australia), or deflect from incidents that involve racism because for many people it's only really racism if you're spewing hateful epithets, or dealing out racially motivated violence. That makes it difficult for some to understand that racism comes in many forms.

"And it also leaves room for little nuance or empathy…are people suggesting that Siraj has fabricated something here? If you oppose racism, I doubt that you’d choose to die on this hill."