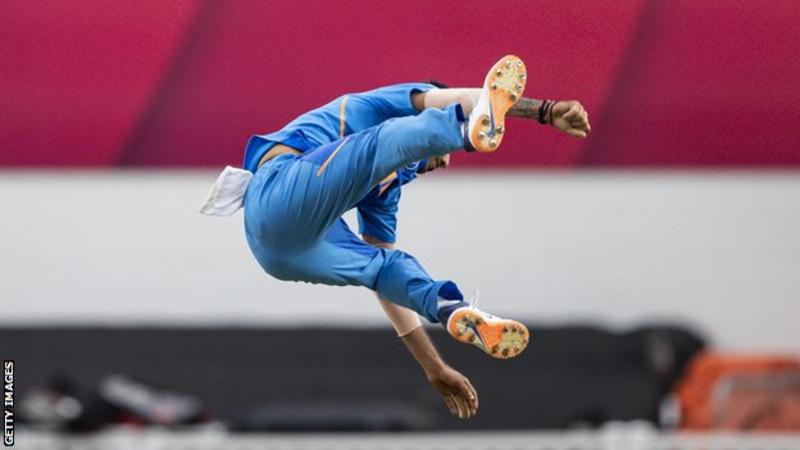 India’s players will risk injury to save just one run in an overall quest to win the World Cup, says coach Ramakrishnan Sridhar.

The two-time winners are unbeaten so far in the tournament and face rivals Pakistan at Old Trafford on Sunday.

“They are willing to risk injuries to save a run, which is a great quality to have,” said fielding coach Sridhar.

“They put the team ahead of themselves. We have fielders who can intimidate any batsman.”

Both sides have fallen victim to the bad weather in the UK this week, with India’s match against New Zealand abandoned without a ball being bowled and Pakistan missing out on their game against Sri Lanka.

Sridhar says it has been “frustrating” for all sides in the tournament but backed the decision to call off the New Zealand match.

He said: “It’s uncontrollable, isn’t it? You really can’t control the weather.

“I went on the ground. It was almost like a skating rink.”

Pakistan must win a match which is likely to draw a global television audience of one billion and saw more than 700,000 people apply for tickets.

Their former fast bowler Waqar Younis – who took 416 one-day international wickets – says the 1992 champions will have to find an “A-Plus” performance to keep in with a shout of finishing in the top four and reaching the semi-finals.

“When Pakistan play India it’s always a huge game, but this meeting is shaping up to be more crucial than ever,” he said.

“The match has always meant so much to both countries. There will be billions watching the game.

“If Pakistan want to stay in the tournament, they have to bring an A-plus performance and win that game.”