The World Cup is a little quieter now.

After topping the group, pre-tournament favourites India were stunned by New Zealand in a sensational semi-final at Old Trafford.

As India captain Virat Kohli said, the two-time winners ultimately did not deserve to go through to the final over a New Zealand side that “showed more composure” and “came through in the key moments”.

When India fell to 5-3 and 24-4 chasing 240 to beat New Zealand, you would not have known the Kiwis were on top going by the noise of the crowd alone.

Even singles were greeted with a roar despite the ground being only two thirds full because of the match being completed on a reserve day. 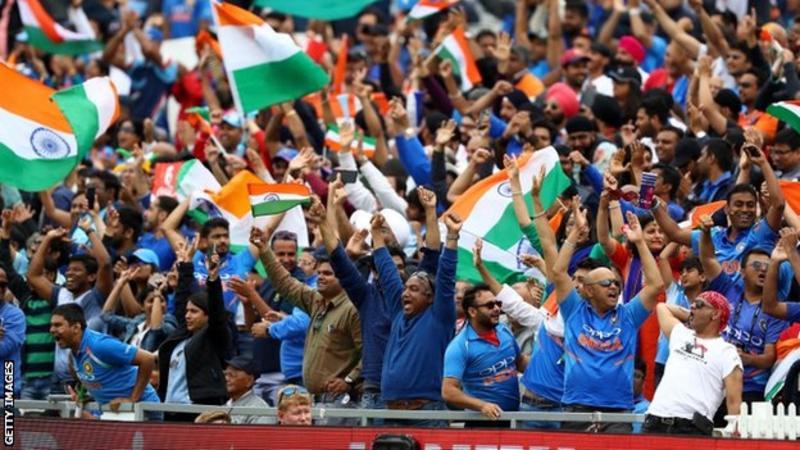 It summed up the vociferous support they have drawn for all of their matches, Old Trafford only falling truly silent once India hero MS Dhoni departed.

Bangladesh and Pakistan have had similarly enthusiastic fans but India have swamped them for sheer numbers.

The flags, the drums, the bodypaint – when India were playing, you knew the match would have a fantastic atmosphere.

Kohli had a quiet, perhaps even disappointing, World Cup campaign with the bat, finishing with 443 runs in nine innings at an average of 55.37, hitting five 50s but crucially no centuries.

The 30-year-old’s dismal run in World Cup semi-finals also continued, making just one against New Zealand, having also only made one against Australia in 2015 and nine against Pakistan in 2011.

But as one of the most charismatic and competitive cricketers, Kohli still left an imprint on this tournament.

At one end there was his heart-warming moment in greeting 87-year-old fan Charulata Patel after clinching a semi-final spot against Bangladesh and walking against rivals Pakistan, despite replays suggesting he had not hit it.

Heck, he even asked his own supporters to quit booing Steve Smith.

At the other end of the Kohliometer was him questioning the “crazy short” boundary following defeat by England at Edgbaston.

But he exited on a magnanimous note, praising New Zealand’s skill in knocking his side out of the tournament.

Superb openers with bat and ball

Rohit Sharma fell for just one against New Zealand but had played a tremendous tournament until that point to advance his claim to be the best ODI opener in the world.

He became the first man to hit five centuries in a single World Cup, with tons against South Africa, Pakistan, England, Bangladesh and Sri Lanka.

Granted it’s unlikely, but if David Warner fails to hit 10 runs in the rest of the tournament, Rohit could yet finish as top run-scorer, having made 648 in nine innings at an average of 81 and a strike-rate of 98.33.

Mitchell Starc may be way out in front in terms of top wicket-takers, but India fast bowler Jasprit Bumrah offered plenty of evidence to back up his ranking as the number one ODI bowler.

Bumrah finished with 18 wickets in nine matches at an average of 20.61 and a staggering economy of just 4.41.

What next for India?

After two semi-final exits in a row, India will now focus on winning a third World Cup title when they host the next tournament in 2023.

They will look to move on from some of the current side, most notably wicketkeeper and former captain MS Dhoni, who at 38 must surely have played his last World Cup and has been a fading force in recent times.

“The faith that the fans had for Dhoni was remarkable but we have seen the last of him in a World Cup, I can’t imagine him playing the next one,” said Test Match Special commentator Prakash Wakankar.

Rohit, at 32, could be a doubt to last the next four years but India have a young core of players that should enable them to remain a strong ODI side.

Bumrah is 25, Rishabh Pant showed glimpses of his talent after his late call-up and is just 21, all-rounder Hardik Pandya is 25 and left-arm wrist-spinner Kuldeep Yadav, who had a poor tournament after a strong year, is 24.

And you can bet that Kohli will be driven to lead his side into a World Cup on a home soil.