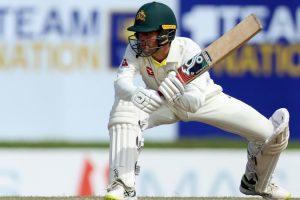 If there was any irony in the way Alex Carey helped take control of Australia’s Test victory over Sri Lanka in Galle with both the gloves and the bat, it came through the fact his triumph beneath the Dutch fort had its genesis in a struggle to conquer Holland (Jon, that is) six years ago. 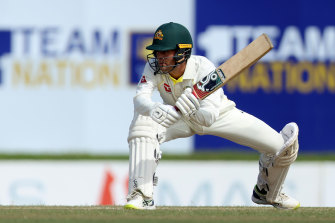 Alex Carey crouches to sweep during the first Test in Galle.Credit:Getty Images

In the second innings of the 2016 final, Carey’s dilemma was made plain. Holland, twirling the ball into the rough outside the left-hander’s off stump, could threaten either edge, and Carey’s attempt to break out with a straight(ish) bat resulted only in a wretched miscue to short midwicket.

From there, it was a case of building a spin game around sweeping, even if, as Carey laughingly related, dismissals to reverse sweeps had a tendency to annoy his wife, Eloise. Undeterred, Carey swept at every one of his first 13 balls in Galle, on the way to a rollicking innings of 45 that helped put Australia out of reach.

“My journey has been having some troubles against Jon Holland in Shield cricket and coming up with a different method,” Carey said. “So I learned five or six years ago from a method that’s not working to go away and adapt.

“There was a lot of talk about the past series here in 2016 and the ball that goes straight and the one that spins. For us, we’ve been able to have a method and hopefully we stick with it for this game. It’s all about learning about what suits you, and from the past you have some fails against a ‘Duck’ Holland, and sitting on the crease, you’ve probably got to go away and change it.”

Funnily enough, Carey’s exit arrived when he tried to play a more orthodox drive down the ground, skying the ball for an excellent catch by Dinesh Chandimal.

“I wish I swept my 47th ball as well!” he exclaimed. “Looking back I tend to sweep spin no matter where it is, and batting seven in the second innings of a game, you get a pretty good understanding of what’s happening in the game.

“For me it’s about keep trusting that method, and disappointed at the way I did get out, from the only one I did hit down the ground – I’m going to put the ‘V’ [between mid off and mid on] away for a little while.” 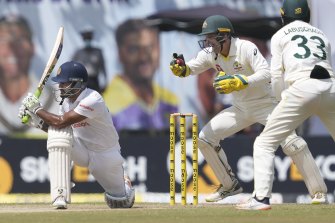 As encouraging for Australia’s selectors was how Carey claimed five chances on the capricious Galle pitch, putting a few near misses out of his mind to clasp a few genuinely high quality catches.

These included a bottom edge from Dimuth Karunaratne off Nathan Lyon that deflected visibly off its line. That Lyon’s first ball of the match jumped up to hit Carey on the helmet was quite the harbinger.

“Getting one between the eyes early probably woke me up a bit,” he said. “I probably didn’t expect that first ball but I think once seeing that we knew we were in for a pretty exciting Test match. Then it’s about clearing your mind from that ball and staying focused on what comes down.

“You can’t really control what the ball does, it’s about reacting well to the one that does go big and having a pretty steady base for the one that skids on. They’ll go in some days and they won’t go on some days But it is about staying in that one ball, that contest when the wicket is spinning and skidding.”

The second Test will be Carey’s 10th, a period in which Australia have prospered at home, in Pakistan and Sri Lanka. All the while, Carey has grown in poise and presence, vindicating the faith of a selection panel who ignored some of the more shrill voices during the Ashes that the 30-year-old was missing too many chances.

“It’s been a huge six months, and really proud of being a part of some wins as well,” Carey reflected. “Loving my little journey in the nine games.”