It had to be a nail-biter, didn’t it? A men’s international summer that was at risk of not going ahead went down to the final over of its final match. Australia had been cruising, centuries from Glenn Maxwell and Alex Carey taking them serenely to a target of 303. Then, from seemingly nowhere, a situation that saw both at the crease with 18 left to get from 16 suddenly became 10 from the last six with neither at the crease.

Unlike the second ODI, where eight wickets were lost for 63 runs, Mitchell Starc ensured this would not go down as a consecutive choke, striking a six at the start of the over and a swept four took Australia home with two balls and three wickets to spare to confirm a 2-1 series win. For England, this was a first series defeat in all formats this summer and their first in a bilateral series at home since August 2015. Australia were their betters then, too.

Ultimately, the match was decided by who best exploited the 60m boundary towards The Point, a giant red monstrosity that usually operates as a conferencing and hospitality facility. This evening it acted as a target that Australia hit more, specifically Maxwell who registered seven sixes on his own to England’s six.

Maxwell’s seventh, off 84 balls, took him the one to take him to a second ODI hundred in his 113th appearance. Those three figure scores are, remarkably, five years apart. Carey’s trip to the same milestone was not only his first but relatively more sedate. His second six took him to 99 before a tuck off his hip from the 106th delivery faced drew applause from the pavilion balcony and the non-playing Australian contingent who were cheering from the hotel balconies.

It was fitting that Starc finished the match having started it in such emphatic fashion with the wickets of Jason Roy and Joe Root with the first two deliveries of the match. An arching delivery from the left-armer saw Roy scythe to Maxwell at backward point before Root was trapped leg before. 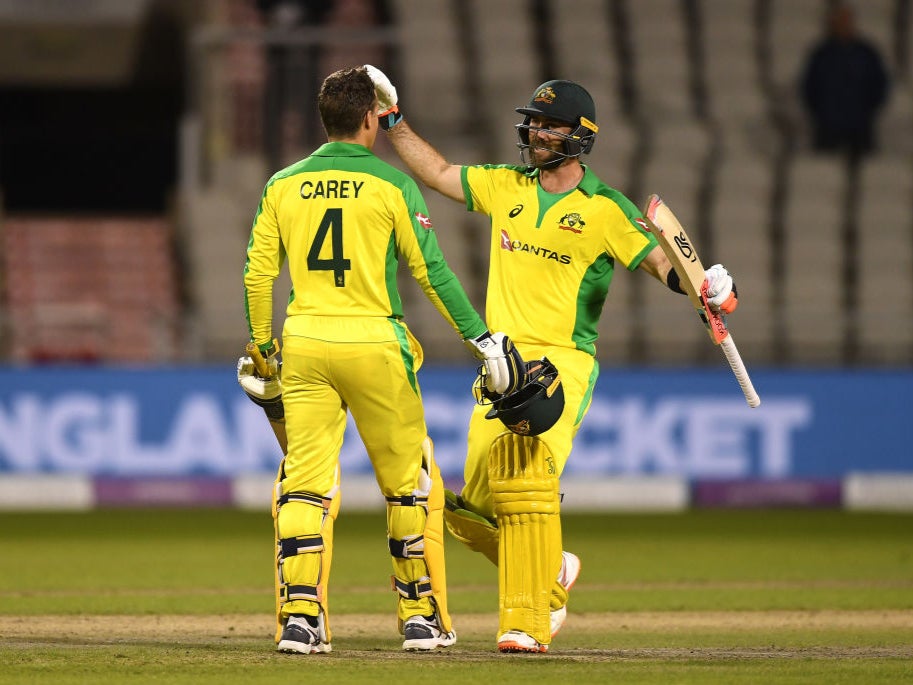 Eoin Morgan, having elected to bat after winning his third toss of the series, survived the hat-trick ball and then laced the next one through the covers for four to get England up and running.

In keeping with the way this team bats in limited-overs cricket, no caution followed, with Morgan and Bairstow blazing 67 in the first 10 overs, the most the hosts have put on in the Power Play this series. Morgan would fall in the 11th over, the first of Adam Zampa’s three wickets for 51, when he failed to clear Starc at mid off. But Bairstow continued without hesitation, bringing up 50 from 48 deliveries.

The onus on the 29-year old making the start count was ramped up when Jos Buttler fell for a cautious and boundary-less that came to an end when he failed to hit Zampa beyond Australian skipper Aaron Finch who had stationed himself in the prime position at a catching extra cover.

A 114 run partnership would follow between Bairstow and Sam Billings, bettering their 113 stand in the first ODI. Having pocketed a maiden ODI century in that fixture, Billings used that confidence to register a fifth score of 50 or more, which included a brace of sixes off Starc: one sent over midwicket into the nets, the other ramped over the wicketkeeper’s head. The blows were salt in the wounds for Start who dropped a tough return catch when the same batsman had just 25.

Soon after he raised his bat, Bairstow did similar with the addition of a kiss of the badge on his helmet after flicking a second six – and 12th boundary – over square leg to bring up his hundred. It was the first of his 10 to take more than 100 balls to compile.

What impetus the pair had given England looked lost when both fell in the space of 16 deliveries. Bairstow’s dismissal – bowled by a smart slower off-cutter from Pat Cummins – came with the first delivery of the final 10 overs, just as the opener was really opening his shoulders. 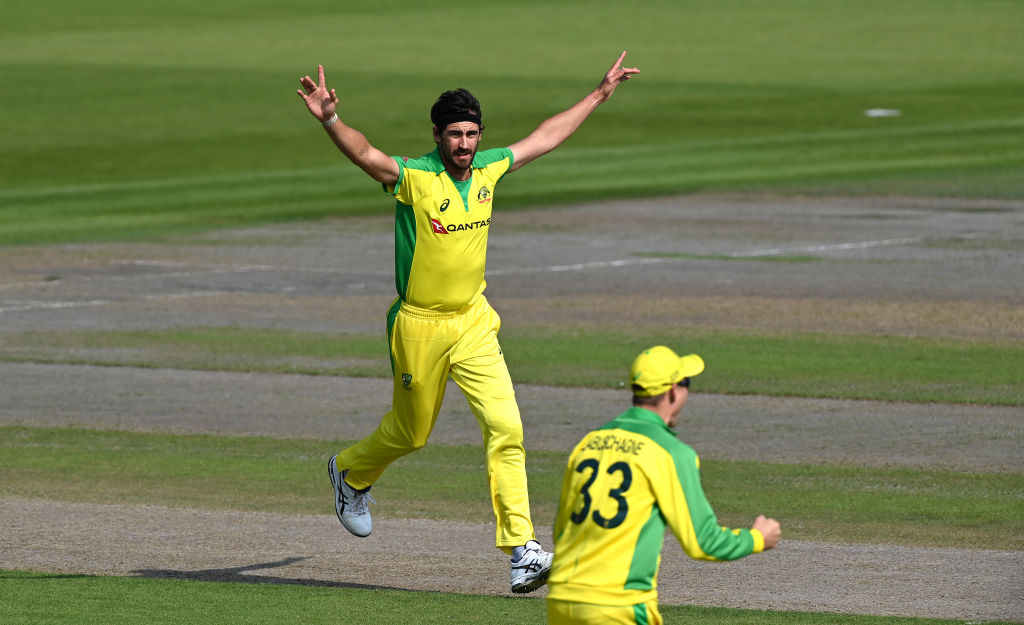 Swapping bat for ball, the Warwickshire allrounder took just 11 deliveries to get in the game, trapping Finch LBW. He should have also had Marcus Stoinis for nought at the start of his third over – a full-blooded straight drive piercing through Jofra Archer’s hands at mid off – but did have it by the end of the over when the No.3 plinked a delivery down the leg side to Morgan at midwicket.

A respectable first 10 overs of 47 for the loss of those two was then diminished when David Warner was bowled in Root’s first over of part-time all-sorts: a dart of off break straightening on the left-hander, who had backed away not anticipating the turn that was to come.

Within six deliveries, Root had his second: Mitchell Marsh, who hurt England in the opening match with 73, tentative with bat and pad together in defence and looping a catch to Buttler for just two.

If it was unclear at that stage whether England were having it their own way, the run out of Marnus Labuschagne confirmed it. Alex Carey dropped the ball into the off-side ring, almost perfectly into the path of Billings, who happens to be armed with one of the best flat throws in the side. A clean pick-up and whip to Buttler had Labuschagne short by a foot and Australia’s top five accounted for in 16.5 overs with 230 still to get.

Morgan subsequently leant on Root for an eight-over stint from the Brian Statham End before he was replaced by Rashid for the 27th over. Though it meant the captain had more overs to play with, by then Carey and Maxwell, the tourists’s last hope, were starting to find their feet.

For Carey,  a reprieve on nine when he guided a no-ball from Jofra Archer into the hands of third man shook him out of a funk. He would go on to make it to fifty from 58 deliveries, aided by Maxwell commanding most of the attention with his targeting of the smaller boundary. The first of his three sixes went that way, with the third being the furthest – off Rashid – taking him to 53 from 48 deliveries.

He, too, was given a life when edging the same bowler when on 44. The full-blooded swing of the bat meant the edge was to hot for Buttler to handle, even with gloves on.

When Maxwell top-edged a catch to short third man to give Rashid his one and only wicket, the 18 needed off 15 was still a cakewalk. The partnership of 212 for the sixth wicket had surely done its job.

But when Carey tried and failed to guide Archer beyond Mark Wood at third man, suddenly there was greater jeopardy on the game. Morgan opted for Rashid to close out the match over Curran, who had an economy rate of 6.66 from his six overs to that point. When the first loopy delivery was carted down the ground by Starc, the punt and the match were done.

Nevertheless, Australia finish the tour on a high, another side to thank along with West Indies, Pakistan and Ireland for coming over amid the Covid-19 pandemic. The cricket product has been top-tier throughout, and more broadly they leave with a greater understanding of their white-ball strengths and weaknesses.

Similarly, England have food for thought as they go into a winter that should see them reconvene in South Africa in November for matches against the Proteas. Both are owed a deal of gratitude for their efforts and both have been grateful for the opportunity to entertain.

The next moves for the international game are uncertain from this point onwards. But from a purely cricketing perspective, its tentative first steps have been a welcome, unequivocal success.

Man Utd face 3,400-mile round trip and suffer unlike rivals in Champions League