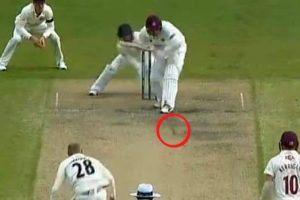 Stop me if you’ve heard this one before — a blonde-haired leggie baffles a hapless English batter with a miracle delivery at Old Trafford.

But on this occasion, Shane Warne wasn’t the magician with the Duke ball in hand.

England has unearthed their own King of Spin, with Lancashire’s Matt Parkinson channelling the Aussie cricket icon to produce his rendition of the “Ball of the Century” in the County Championship on Friday.

Facing Northamptonshire at Manchester’s Old Trafford, opposition captain Adam Rossington was undefeated on 49 when Parkinson produced what can only be described as a spinner’s dream ball.

Pitching comfortably outside leg stump, the delivery spun sharply and crashed into the right-handed batter’s off stump.

It was oddly reminiscent of Warne’s famous “Ball of the Century” to England batter Mick Gatting in the 1993 Ashes series — which coincidentally took place on the same deck at Old Trafford.

Shane Warne would be proud of Matt Parkinson pic.twitter.com/D7SmBXvlP8

Warne congratulated the 24-year-old tweaker on Twitter, but couldn’t resist the opportunity to remind everyone he mustered the feat with his first delivery of the series.

“Wow! Was that his first ball of the summer too? Hahahaha. Love it, congrats mate and well bowled. Spin to win,” Warne tweeted on Saturday.

Parkinson has played 20 first-class matches to date, claiming 62 wickets at a commendable average of 25.22.

He has represented England in two ODIs and two T20 internationals, but is yet to make his Test debut.

Parkinson finished the innings with figures of 3/49 from 20 overs as Northamptonshire was rolled for 177 — Rossington top-scored with 49.