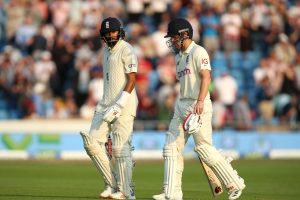 England enjoyed one of the most dominant opening days in their Test history at Headingley routing India for 78 all out then cruising to 120 without loss.

Nine days on from a dispiriting, error-strewn defeat at Lord’s England barely put a foot wrong as they scattered the touring line-up to the Yorkshire wind inside 41 overs before Rory Burns and Haseeb Hameed reeled off a pair of serene half-centuries.

By stumps the lead stood at 42, but that did little justice to the one-sided thrashing that had been administered on the second anniversary of Ben Stokes’ Ashes miracle at the same ground.

Yet while that was an improbable rescue mission, the third match of the LV= Insurance series conjured different memories of famous days against Australia.

Not since Trent Bridge in 2015 have England been in such a watertight position at the end of day one and not since Melbourne 2010 have their openers single-handedly overtaken an opposition total. An unlikely trilogy spanning just over a decade now exists.

Burns (52no) and Hameed (60no) deserve huge credit for the way they tackled their first assignment as an opening pair, but while they delivered handsomely it was the excellence of a four-pronged bowling attack which carved out the platform.

Invited to bowl first they delivered in outstanding fashion, record wicket-taker James Anderson serving up a majestic new-ball spell of eight overs for six runs and taking out the decorated trio of KL Rahul, Cheteshwar Pujara and Virat Kohli.

Remarkably he did not get his hands on the ball again, with Ollie Robinson the returning Craig Overton and Sam Curran sweeping up the next seven wickets, including a sequence of four in six balls in a chaotic afternoon session.

Both Overton and Curran found themselves on hat-tricks during that sequence, with the former justifying his recall after two years with figures of three for 16.

Anderson – with 42 wickets at 25.33 in his previous 11 outings here – certainly knows how things are done in this part of the world and wheeled out a delectable diet of inswingers, outswingers and wobble seam.

He wrapped up India’s top order and delivered three outside edges in a row to wicketkeeper Jos Buttler.

Rahul wafted airily at the fifth ball of the day, Pujara absorbed a steady stream of inswing then clipped the one that nipped away and Kohli caved in with a loose drive after an awkward half-hour stay.

Taking out the bullish captain for just seven was a big moment and, although Anderson opted not to reopen last week’s running war of words, his vein-popping, eye-bulging celebration told its own story.

From 21 for three, Rohit Sharma and Ajinkya Rahane managed a partial comeback only for Robinson to have the latter caught behind in the last act before lunch.

At 56 for four there was room for a fightback, but England killed the run-rate and converted that pressure into an avalanche of dismissals.

Robinson added his second when Rishabh Pant wafted lazily to hand Buttler his fifth take of the day, before Overton’s short ball dragged a ham-fisted pull out of the previously steadfast Rohit. He trudged off, top-scorer with just 19 in 105 balls.

That was the first of four wickets that fell with the score locked on 67, Mohammed Shami steering Overton’s next ball to third slip before Curran pinned Ravindra Jadeja and Jasprit Bumrah lbw.

Shami and Bumrah had knocked the stuffing from England with career-best knocks at Lord’s, but this time both bagged golden ducks.

England are prone to their own batting disasters, of course, but Burns and Hameed were reading from a different script. Given seven tricky overs before tea, they calmly added 21 runs.

The evening session then turned into an extended showcase for the pair, who ran positively from the off and bristled with intent throughout.

Hameed, into the third knock of his international comeback, bedded in nicely and was soon indulging his cut shot, tagging successive deliveries from Ishant Sharma then lashing Mohammed Siraj.

Burns got his drive going against the seamers, welcomed Jaedja’s spin with a confident sweep and energised the Western Terrace with a flat pull for six off Siraj.

With the scores level, England’s openers overtook the Indian total courtesy of a misfield – Jadeja gifting Hameed another boundary.

He was having fun now, producing a couple of wafer-thin late cuts before reaching fifty with a nick that flew for four off Rohit’s fingertips. Burns followed him to fifty, clipping Bumrah off his pads to put the icing on a dream day.