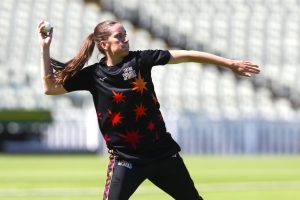 Emily Arlott has been handed her first England call-up for the one-off women’s Test against India just a few days after taking a hat-trick in the Rachael Heyhoe Flint Trophy.

Arlott – who finished with five for 29, including four wickets in an over, to help Central Sparks thrash RHF defending champions Southern Vipers by 120 runs on Saturday – is part of a 17-strong squad.

Fellow seamers Tash Farrant and Freya Davies, all-rounder Sophia Dunkley and spinners Sarah Glenn and Mady Villiers have represented England in one or both of the shorter formats but are uncapped at Test level.

Test cricket has been a marginal presence in women’s cricket with just eight such fixtures in the last decade and six of those were Ashes contests, but England’s four-day match against India starts on June 16 in Bristol

Nat Sciver has been named England vice-captain across all forms of international cricket ahead of a game in which it is expected the hosts will trim their squad to allow non-selected players to feature in the RHF Trophy.

Head coach Lisa Keightley said: “It’s been hard to pick a squad given the balance of needing cover in a Covid world while wanting to give players as much chance as possible to play cricket.

“We want players to have opportunities out in the middle so we’re looking to reduce our numbers slightly ahead of the Test to give the non-selected players that chance.

“I’m really excited by the summer ahead. We’ve been working really hard across the last 10 weeks. India are a strong side and it’s the beginning of a two-year journey for us that takes in two ICC World Cups, an Ashes and the Commonwealth Games.”