Home » Сricket » Dylan Cleaver: Two days to save the concept of the World Test Championship final 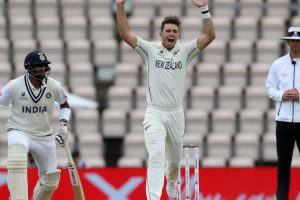 There has been so much wrong about the first four days of the World Test Championship final, even if there are so few to blame.

To quickly recap the first four days of “action”, India started well before struggling through to 217 in difficult batting conditions against the sustained excellence of New Zealand’s all-seam bowling attack.

In reply, New Zealand has squeaked through to 101-2 against India’s wonderfully balanced attack, relying on a lot of luck and even more good judgement.

Under normal circumstances there would have been around 350 overs completed. Instead we have had just 141.

The cricket that has been played has been gripping, although batting attitudes have tilted towards attrition rather than attack because the ball has been darting around corners on a surface that has pace and bounce but is in desperate need of some vitamin D.

Any hope that the inaugural World Test Championship final might have reminded casual fans of the allure of long-form cricket has been lost in the fog.

Two whole days washed away, players leaving the field for bad light even with banks of floodlights illuminating the field and the requirement of a sixth day to try to manufacture a result have combined to make a lie of the “Ultimate Test” marketing and has instead somehow made red-ball cricket less vital than it was before.

That is a real shame because even in the limited play available it is obvious that these two great teams deserve a canvas worthy of the occasion.

The first step would be to grant the No 1 qualifying side home advantage for the final, even if it meant independent curators overseeing pitch preparations to make sure an appropriate and fair surface was produced.

Even given the crazy state of the world in the midst of a pandemic, you can see that neutral venues reduce some of the necessary frisson.

(Remove the implications of Covid-19 from your mind for just a second and imagine this final being played in front of 65,000 at Eden Gardens for a second. Much better, isn’t it?)

In truth, the problems for the WTC final began long before banks of cumulonimbus in Northern France floated inexorably over la Manche with a laser-like focus on the Hampshire Bowl.

The demands on India’s players are abusive and the apathy in Virat Kohli’s pre-test comments – “this is just another test match” – was no doubt an accurate reflection about how he and his teammates felt about the imposition. If the WTC final concept is to have a permanent place on the calendar, getting cricket’s global mega-power on board would be a start.

Secondly, the venue does not exactly scream marquee event. The Hampshire Bowl, as it is known for this one match due to the need for a “clean” stadium, is a curious venue, situated on the outskirts of Southampton, next to a motorway and across the road from an enormous retail park.

The reasons for switching the game from London to Southampton were sound given the onsite Hilton hotel and the possibility the game would need to be played in a bio-secure bubble.

Whatever common sense was used, you cannot deny the “The Road to Lord’s” catchline has an essence to it than “The M27 to the Hampshire Bowl” will never have.

There is now an added urgency to days five and six because the context so desperately sought for test cricket looks hollow in the face of a likely draw.

There are close to 200 overs available and the conditions still lean heavily towards a batting collapse or two.

This fact might save not only the inaugural WTC final, but the concept.

If, in a little more than 24 hours, we are writing about the prospects of a New Zealand fourth-innings chase on the final afternoon, all the shortcomings that have been laid bare over four painstaking days might be rinsed away.

The script might be rewritten from wasted opportunity to test cricket’s spectacular rebirth.

Where there is dry there is hope.