AB de Villiers hasn't wasted a moment to make his mark on the Big Bash League, easing Brisbane to a comfortable win in his debut after James Pattinson's maiden five-wicket haul skittled Adelaide at the Gabba.

The South African recruit struck a serene 40 off 32 balls on Tuesday as the Heat chased down the Strikers' 110 with seven wickets and 28 balls to spare. 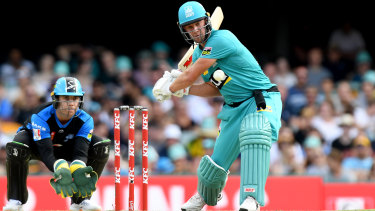 AB de Villiers of the Heat shapes up to hit a four against the Adelaide Strikers at the Gabba on Tuesday.Credit:Getty Images

Entering at 2-11, his innings began with a crisp cover drive to the boundary off spinner Rashid Khan and featured calm strokes to all corners to the delight of the 19,681-strong crowd.

His innings ended anticlimactically when he picked out the deep mid-on fielder, but by then the win was in the bag.

But with the help of Matthew Renshaw (52 off 45 not out), the innings ensured a Chris Lynn golden duck didn't lead to another failed chase.

De Villiers only arrived in Australia on Sunday night but has already shown he can be a steadying influence as the Heat eye another title.

"There was quite a bit of hype coming in here, I wasn't expecting that," he said.

"I want to do well, but most important thing is for my teammates, I want to contribute and leave a legacy in the team room.

"If I entertain the crowds by doing that, it's a bonus."

Their victory improved the Heat (5-4) to equal third with five games to play until the finals, while the Strikers are now 4-4-1 and on the brink of the top five. 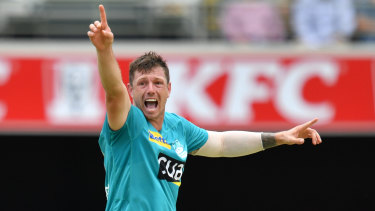 James Pattinson of the Heat celebrates the wicket of Harry Nielsen of the Strikers.Credit:Darren England/AAP

Earlier, Pattinson set-up the victory with his BBL-best 5-33, with the Australian quick at one stage boasting figures of 4-18 off just 14 balls.

His first four wickets came courtesy of catches from wicketkeeper Jimmy Peirson, but only one was a regulation edge.

Travis Head squirted an edge off his hip that lobbed towards short-fine leg, while Philip Salt and Harry Nielsen were both caught down the legside.

De Villiers then pouched a sharp diving catch at short cover to claim the in-form Jonathan Wells and hand Pattinson his fifth.

The Strikers were eventually bowled out in the penultimate over.

The haul bettered Pattinson's 4-23 while playing for the Melbourne Renegades, and was just the 13th five-wicket haul in BBL history.

Pattinson's day out came after a night to forget in his first BBL appearance of the season in Perth, having been slammed for 52 runs in his four overs.