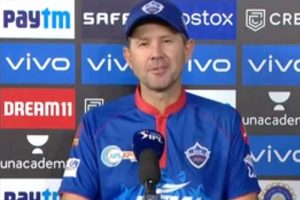 Australian cricket great Ricky Ponting concedes it’s a “really strange” feeling being in India amid a COVID-19 crisis but hopes continuing the Indian Premier League proves a positive distraction for the struggling locals.

Ponting is coach of the Delhi Capitals, with fellow Aussies Steve Smith and Marcus Stoinis in his squad. All are likely to be stuck in India until the end of the tournament after a travel ban was put in place by the federal government.

The travel ban is in place until May 15. The group stage of the IPL is due to finish on May 23 with the final on May 30, and the Australians involved in the tournament could be forced to stick it out.

After his team lost a one-run thriller to Royal Challengers Bangalore on Tuesday night, Ponting said his heart went out to all Indians and said the ban on travel for Aussies was only a “small part” of concerns.

“We’re very aware of what’s happening outside and through greater India at the moment, and our hearts go out to every person in India that is struggling.

“We’ve had one of our players leave. Ravi Ashwin left to be with his family, so it has probably been affecting us, and we are talking about it more than most teams are.

“There have been some other revelations … with things our government have made as far as Australians returning.

“There’s no doubt there have been a few distractions along the way but the travel side of it for us Australians that are here is only a very small part of what we are talking about and what we are thinking about.

“We understand how blessed we are to be able to turn up and do what we did. Hopefully, there are a number of people around India that got some enjoyment out of watching a great game of IPL cricket.”

IPL cricketers, New Zealand’s Kane Williamson and Australia’s David Warner decked out in a hazmat suit on board a domestic flight in India. Picture: Instagram.Source:Supplied

Prime Minister Scott Morrison made it clear, when announcing the travel ban, that cricketers would not get special treatment.

“This wasn‘t part of an Australian tour,” he said.

“They’re under their own resources. And they’ll be using those resources to, I’m sure, to see them return to Australia in accordance with their own arrangements.”

Andrew Tye became the first Australian to leave the IPL last weekend, and both Kane Richardson and Adam Zampa are also trying to get home.

The pair gave up their six-figure contracts with the Royal Challengers Bangalore, but their plans to return home were derailed by Tuesday’s announcement.

While mystery surrounded the pair’s location earlier on Tuesday, it has been revealed both players are in Mumbai – away from their teammates – and are facing an uncertain future.

On Tuesday Tye said the bubble players were “safe”, but he wanted to get home.

“The bubble is very safe and very contained, so we didn’t really have too much idea what was going on other than what we were seeing on the TV or on social media really,” Tye told Network Ten’s The Project.

“I think it was the fact that things were happening in Australia, with hotel quarantine cases being so rough with cases from India. And then governments, state governments, sort of saying they want to back out of having flights from India land or cut down the number of people coming in from India.

“Obviously, some are trying to get out and others are quite happy and content to stay there and see the IPL out.

“I respect each and every one’s individual decisions and that’s their prerogative, and I did what was best for me.”